SB 469 VictoryMarks New Direction In The Fight Against Corporate Greed 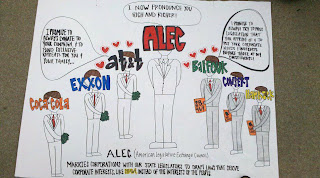 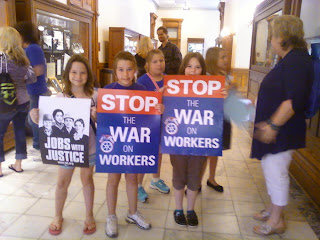 Tomorrow(4/4)at 11am a press conference will be held In front of Senator Balfour's $29,000/year condo: Spire Condominiums 860 Peachtree St. NE. to celebrate victory over defeating SB469 and to launch the Spring Offensive of the 99%


Balfour was the author and sponsor of SB 469 which sought to criminalize actions like protests in front of private residences. Ethics complaints have been filed against Balfour for his unscrupulous spending of public monies.

Background of SB469 campaign and Launch of 99% Spring:

News of the 1st amendment crushing, anti-worker SB469 came out just over a month ago. Word spread like wildfire amongst Georgians of the need to mobilize. Despite the seeming unconstitutionality of the bill it quickly became apparent that Senator Balfour and his corporate backers ALEC (American Legislative Exchange Council) and the Chamber of Commerce would stop at nothing to ram the bill through. The bill was pushed through the senate with no debate allowed on the controversial bill, a rare and undemocratic move.

Thousands of everyday Georgians including trade unionists, civil rights leaders, community members, people of faith rallied at the capitol in clear opposition of the bill. Civil rights leaders loudly proclaimed that our community would put our bodies on the line to stop this bill. In response, Balfour pushed harder, leveraging his deep monied connections to hold a back door Industrial Relations Committee meeting on SB469 giving no public notice to slide the bill through to the house and again trying to bypass our democracy.

This blatant attack on free speech, working people and democracy galvanized Georgia to resist. The tea party came out in support of organized labor against the bill. Dozens were prepared to commit civil disobedience. The overwhelming pressure forced cracks in Balfour's ranks, the alliance forged between labor and the Georgia community stopped the bill in its tracks. The clock struck midnight on the last day of the legislature and the bill had been killed by a historic labor and community alliance.

This victory marks beginning of a 99% spring offensive. Everyday Georgians will gather in-front of Balfour's Atlanta condo to announce our historic victory and plans to go on the offensive to take our state back from corporate giants and the politicians they own like Senator Balfour. As part of the 99% Spring over 100,000 community members in our state and country will be trained in collective non-violent action and people's economics to take our economy and government back from the 1%.
Posted by Atlanta Economic Justice Program/AFSC at 11:25 PM