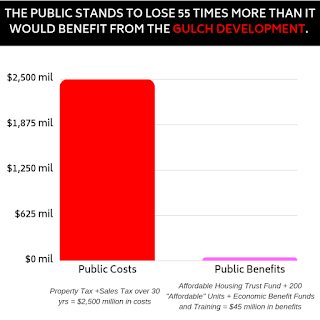 1. Public cost is 55 times the public benefit. This is a grossly disproportionate cost/benefit in CIM’s favor. Council has done well to hold it. This deal is so terrible that Council now needs to walk away from it. You don’t negotiate when the gap is so enormous between what the billionaires are demanding from the public and what their scheme is worth to the public

3. When the public is putting in as much as 50% of the cost to develop a private, commercial project, the public should own 40% of it. Instead, we will own nothing. The only explanation for this grotesque imbalance of advantage is CIM’s Abject Greed.

5. Despite all the smoke from the project’s boosters, this lost property tax really IS a cost to the public. Because if offices, hotels etc. are NOT built in a tax-free Gulch, they will be built in taxable parts of town, such as Tech Square, Midtown, S Downtown, Atlantic Station, Buckhead and around the Beltline. If CIM does not get this deal, the demand for office space, etc. will be met by developers in places where new construction pays taxes. In other words, this Gulch scheme ‘cannibalizes’ a massive amount of commercial growth and deprives the city and schools of future revenues for 30 years.

6. The same is true of the sales tax. This scheme would short the city and the state of some $500mm at 2018 prices thru 2048. Retail sales demand is not going to be created by putting stores in the Gulch. Those sales are going to happen somewhere in town, and the only question is whether they pay tax to the state and the general fund or not. Again the Gulch scheme would ‘cannibalize’ or displace retail activity in town and rob the state and city of tax revenues needed to pay for public services. So the total revenue loss IS $2.5 Billion. That is over $5,000 per man, woman and child resident in the city. It is equivalent to a $20,000 donation or more from every family of four in Atlanta to the billionaire Ressler brothers.

7. The public benefits that have been dribbled out amount to around $45mm. The different cash funds are easy to add up: $42mm (though with no guarantee they’ll be spent to create real community benefit). The 200 housing units affordable at 80% AMI are worth only about $3mm, because CIM can sell them off after 3 years as rentals. CIM could sell the 200 units at prices for which a buyer would need an income 20% higher than the area median. By definition, that’s not affordable. Forget the claim that there might be some extra units for low-income folks: that’s only if AHA pays for them, which means it costs CIM nothing.

8. The hard sell for this deal pretends that it brings 37,000 jobs to town. That is nonsense. Employers bring jobs to town – over 40,000 new jobs have moved here in the past 6 years – NCR, Worldpay, Honeywell, Anthem, Kaiser and so on. They locate here for our competitive talent, universities and airport. Office towers do not bring jobs here. (If they did, we’d have had no unemployment in the great recession, because we sure had masses of empty office towers, including the biggest - Bank of America Plaza.) So the scheme does not bring one single job here. CIM is betting that the city will continue to attract employers to fill the huge office towers that they are planning to construct. But this scheme does nothing to attract those company relocations. In fact, if Council allows this crazily one-sided deal, smart company executives will question the city’s financial responsibility. They’ll wonder if a city too busy to think can be trusted to provide good
schools and public services for their employees.

10. The final arm-twist on Council has been a Norfolk Southern deal. NS wants us to give this enormous subsidy to CIM so that NS can sell Gulch land to CIM at a big profit. There’s nothing in that for the public. But NS might move 1,000 HQ people here in a consolidation. To justify a $2.5bn subsidy, we’d need not 1,000 jobs but about 700,000 jobs! That’s around three times the entire number of jobs in the city. It’s also 14 times the size of Amazon’s HQ2, for those who still imagine HQ2 will choose Atlanta.
Posted by Atlanta Economic Justice Program/AFSC at 11:14 PM 4 comments 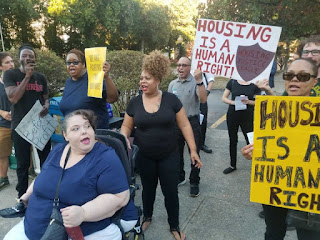 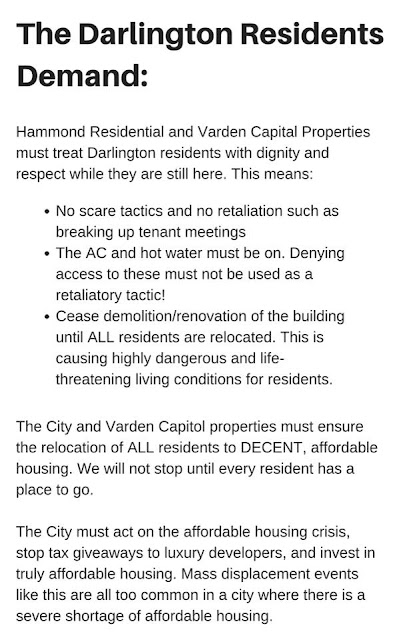 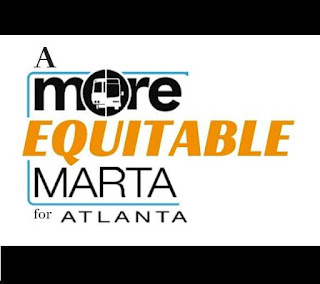 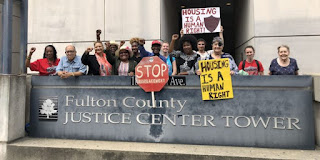 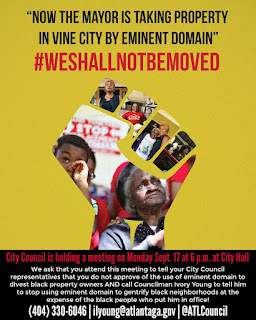