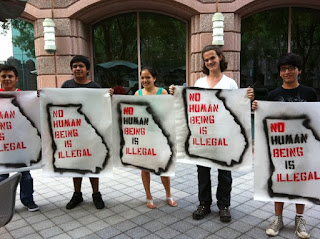 On Tuesday, Jan.17th, one day after Atlanta celebrated MLK day, Turner Field Community Benefits Coalition (TFCBC) residents and students packed City Hall to speak out against Turner Field stadium purchasers. On Dec.31st, 2016, Georgia State University and its development partners closed a purchase deal to acquire Turner Field stadium and its surrounding lots. This deal, however, did not include the detailed Community Benefits Agreement TFCBC has researched and arranged over the past two years. GSU and Carter Development have taken a stance of non-negotiation, and no-CBA, despite active outreach by Turner Field residents to the contrary. The refusal to include a Community Benefits Agreement in the purchase deal, first through the sale by the City, and later in the purchase by GSU, has created a climate of non-negotiation. Without a CBA, there is no guarantee that development in and around Turner Field will not displace families, nor economically benefit residents who remain. The welfare of the Turner Field Neighborhoods, and especially its most low-income residents, has been dramatically de-prioritized by the City of Atlanta, and their future neighbor, Georgia State University.

In response to these actions of disregard, on Tuesday, residents and students spoke out. Protest began when Mayor Kasim Reed took the podium at City Hall. Dozens turned their backs in silence to Reed, who has overseen the stadium’s sale and its subsequent (mis)allocation of purchase funds. They remained standing throughout Reed’s speech, physically filling most of the audience space. Reed exited the council, but not TFCBC’s protest.

Residents and students again took the floor during public comment. For nearly four hours, Morehouse and Spellman College students, Peoplestown residents, GSU students, NPU-V district chairs, and Housing Justice League organizers spoke out against the CBA’s absence in the Turner Field purchase deal. Senator Vincent Fort detailed the history of the Turner Field neighborhoods, and how the purchasers’ refusal to sign a CBA was only the latest in a string of unfriendly developments. “The residents of Peoplestown and beyond have been put under the thumb of developers for far too long. Their priorities for their community need to be raised up. The Turner Field Neighborhoods demand a Community Benefits Agreement that acknowledges their humanity. No CBA, No Deal!”

“Without the CBA in the sale of Turner Field, the community was not promised safety, not promised job security, not promised the right to stay in their homes. It is violent that the City of Atlanta would undertake such a sale, in complete disregard of residents’ welfare,” noted Agnes Scott activist Idil Hussein.

Throughout the comment session, speakers gave statements of high intensity that directly addressed the City and GSU’s failure to negotiate with residents. Spellman activist Eva Dickerson indicted City Council representatives as unsatisfying black female role models, and highlighted the need for non-official black woman activists to take on leadership and direct political change. GSU activist Sam Hogan recorded dissatisfaction with Georgia State University and Carter Development for continuing to undercut residents. HJL staff member and tenant organizer Sherise Brown demanded greater transparency from the City in its development negotiations. “The City only met with a few residents from Summerhill during the purchase negotiation…and the same with GSU and Carter. This hand-picking of residents does not give other neighbors the opportunity to voice their concerns…and it leads to purchase deals like this one, with no CBA.”

Morehouse activist and ATL is Ready organizer Avery Jackson noted during public comment, “This loud, clear-spoken collection of students standing alongside black communities against city-wrought gentrification…this is the new unchained, unregulated politics of 2017. We are not here to ask questions or demand change. We are here to re-set the negotiation table so that community voices can never not be heard.”
Public officials and development stakeholders have often argued that any Community Benefits Agreement negotiation is cost-prohibitive. But, they fail to acknowledge that the investments and priorities addressed by the CBA could be funded entirely from the sale proceeds of Turner Field.

“The sale has thus far generated at least $30 million in revenue, but has been invested into another corporate-sponsored stadium rather than the Turner Field Neighborhood communities. Eminent domain law has been used as a tool of urban gentrification, allowing the City to land-grab from the Turner Field neighborhoods,” noted Housing Justice coordinator Tim Franzen and PRC president Columbus Ward. Short of revising the eminent domain ruling and regaining land, TFCBC members seek to orient the development process in ways that would benefit the community. Repaved streets, better insulated schools, and more fresh produce-carrying grocery stores would all be small examples of such a process, and indeed, are the objectives of a CBA.

After the speakout ended, students took to the chamber floors for a sit-in. They broadcast a Reverend Dr. Martin Luther King speech as councilmembers conducted their affairs, twirled car keys, drew silent attention to Councilwoman Carla Smith, and altogether unsettled business as usual. This creative resistance will amplify if and as the Turner Field purchase deal moves forward without a Community Benefits Agreement. TFCBC activists are redoubling their commitment to stop inequitable development in their community.