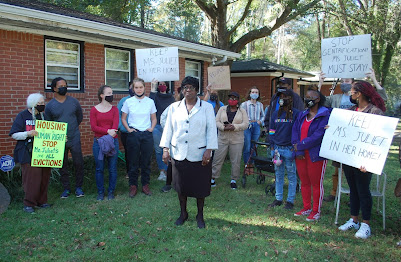 What: Press Conference to Save Ms. Juliet's Home

When: Thursday, April 21, at 4 p.m.Where: 3529 Misty Valley Rd Decatur GAPlease join us tomorrow at a press conference and neighborhood meeting at the home of Juliet Brown, a Black elder of Decatur who is facing a pending writ of possession in the fight to remain in the home she’s rented for 27 years.

After lengthy negotiations, Dustin agreed to allow Ms. Juliet to purchase the home. Neighbors and community members helped raise money, and Maxwell was presented with a finalized purchase agreement. However, Maxwell is no longer willing to sell, and has filed to proceed with the eviction.

Ms. Juliet has been fighting this eviction for nearly a year, and her case will now go to Georgia Superior Court. Ms. Juliet’s fight is just one piece of a larger struggle against gentrification and displacement in predominantly Black Atlanta-area neighborhoods.

Ms. Juliet and Housing Justice League refuse to allow Dustin Maxwell to get his way in the year long struggle to save Ms. Juliet’s home. It is not right to displace a long-term, Black senior resident just to make a quick buck.Please come out and show your support. Bring Signs! 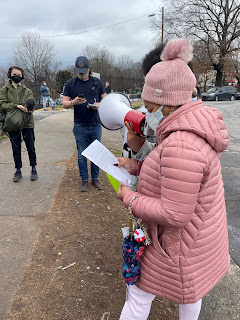 On Tuesday, February 22, Forest Cove residents and allies were thrilled to learn that Millennia— the long-time manager and new owner of the 396-unit Section 8 apartment complex—had agreed to cancel their rent payments. AFSC has been working in partnership with Housing Justice League to help tenants in Forest Cove organize since 2018. Residents have been waiting for years in life-threatening conditions for Millennia to purchase and rehabilitate the property. Millennia finally bought the property in April 2021, and during the summer of 2021 it began the process of organizing relocation meetings and preparing residents for their temporary move off-site.

Though Millennia originally estimated that the first residents would be off-site by the end of the summer, as the months passed this proved to be a generous (and perhaps disingenuous) prediction. To make matters worse, Millennia was failing to provide residents with the security and maintenance services that they needed to remain safe in their units while they waited to be moved.

In January 2022, the Forest Cove Tenants Association decided that enough was enough. They delivered a demand letter to the front office asking for rent to be canceled, the expansion of the maintenance team, better security, and a written commitment from Millennia affirming residents’ right to return after the renovation.

Weeks passed with no response, and during that time the tenants association learned that despite Millennia’s claims that everything was going smoothly, a City of Atlanta Judge had ruled in December that the property should be condemned due to the conditions. The Georgia Department of Community Affairs chose to deny Millennia’s application for low-income housing tax credits, which would have funded Forest Cove’s renovation and relocation. Suddenly, the residents were stuck in limbo again. Over the past month, many of them had begun to view new temporary units, and a few were on the verge of moving out. But after the condemnation order was issued and the process paused, Millennia did not notify the residents for days. Residents received nothing but frustrating silence as they struggled to figure out why the relocation specialists were no longer answering their calls. 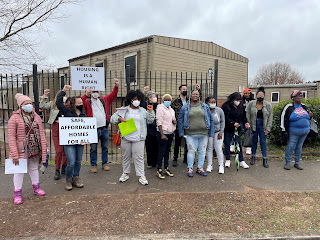 As this all unfolded, Millennia continued to collect rent from Forest Cove. Shocked and angered by the abrupt halt to the relocation process, residents began to float the idea of not paying rent on one tenant association call. The idea gained traction, and on the 22nd a group of residents gathered with allies outside of Forest Cove’s front office to deliver a letter stating that they would no longer pay rent. The front office staff locked the door, and would not come out to receive the letter. Security asked the group to retreat to the other side of the property’s fence. After much of the crowd had dispersed, four Atlanta police officers arrived, called to the complex by the front office staff. Minutes later, a letter was handed to one resident from the front office—it was a response from Millennia to the original demand letter from January, stating that Forest Cove residents would not have to pay monthly rent until they are relocated.

This is a huge victory. Residents are now able to use this extra money to care for themselves and their families while they wait to learn what the future of the complex will be. Their final ask is for Millennia to reimburse any and all balances that residents have paid since April 2021. We are still waiting for Millennia to respond to this request.

For more information about Forest Cove and Millennia, you can check out these articles:

The last year at Forest Cove: Tenants abandoned and a renovation out of reach https://www.wabe.org/forestcove/

Living Hell: A failure of government oversight produced a housing system across the U.S. that hurts people who need it the most https://www.houstonchronicle.com/news/investigations/article/Living-Hell-housing-tenants-hud-properties-problem-16000650.php

Posted by Atlanta Economic Justice Program/AFSC at 11:11 AM 0 comments