The Two Faces Of Coca Cola

Today I joined about 30 others at the annual Coca Cola shareholders meeting at the Cobb Galleria. It was part of an effort organized by the Killer Coke campaign and Occupy Atlanta to shine a light on the gross injustices.

The 30 of us all came with Coca Cola with stocks in our names, which gave us the right to enter the meeting. It was my first experience on the inside of a shareholder meeting, and I must say it was truly a disturbing experience. Coca Cola's CEO, Muhtar Kent, proceeded over the meeting, which was full of gross false claims.

The face of Coke that Kent painted was one that placed people over profit, strives to be a Steward of the environment, provides children with healthy lifestyle choices, and provides good jobs around the globe. This is public face pushed with a strong PR campaign is a facade.

The face we know is quite different.

Although Coke spends millions of dollars every year on advertising to market their products with a positive and happy spin, a quick look inside their business practices shows that that like so many corporations, profits take precedence over ethics, morality, and justice. 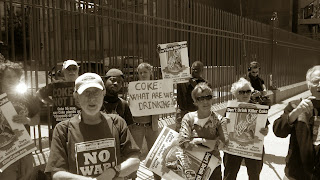 Coca Cola’s crimes reach all the way across the globe. In Latin America, they have been accused of hiring paramilitary forces to torture, intimidate, and even murder union organizers in countries like Columbia and Guatemala. They profit off of child labor used in the sugar cane fields of El Salvador. In Mexico, they use their bought off pals in the government to control the market, making competition against Coke virtually non-existent. In a country where almost every citizen has access to Coca Cola products, over 12 million people in Mexico don’t have access to clean water. In India, their plants contaminate and dry up the water sources, devastating farmers, towns, and the people that live in them. In China they’ve been known to have deplorable working conditions in their factories, and benefit off of prison labor. The list goes on and on.

Their crimes are not just international though. Coca Cola Company and its executives are a classic case of the 1% here at home. Coca-Cola sits on the board of ALEC (the American Legislative Exchange Council) that produces legislation designed to limit workers rights, deny climate change, keep private prisons full, restrict access to voting, and many other pro-business, anti-people agendas. They spend millions of dollars lobbying our representatives and agencies to ensure that their products can be sold without regulation. They aggressively market sugary beverages to children that have no nutritional value, and are directly tied to record high rates of obesity and diabetes. They avoid warning consumers of known carcinogens in their products, such as aspartame, BPA, and 4-methylimidazole. Their executives, like CEO Muhtar Kent, receive millions of dollars in compensation each year, while average workers around the world are barely paid a living wage, and any attempts to collectively bargain for rights are quickly abolished. And of course they avoid paying their fair share of taxes with billions of dollars held in off-shore tax havens such as the Cayman Islands. 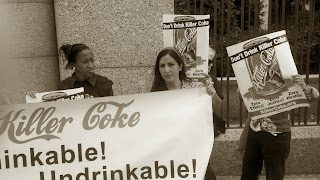 Coca-Cola also has a long history of racial discrimination, from their support of the apartheid government in South Africa, to countless instances of discrimination here at home. Case after case, workers have complained about the rampant racism that occurs in Coca Cola’s factories, as well as the lack of opportunity for minorities to advance within the company. And although they lack respect for minorities in the workplace, they still aggressively market their harmful products to African Americans and Latinos at higher rates than other groups leading to higher rates of obesity and diabetes. Most recently, through their relationship with ALEC, they have shown their support for the “Stand Your Ground Law” in Florida that is being used as a defense in the murder of Trayvon Martin, an unarmed 17 year old African American boy. Many credit this ALEC legislation as the reason Trayvon’s killer remained free for weeks. 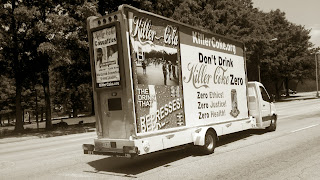 So it's painfully clear, after sitting through the two hour shareholder meeting that there are two very different faces of Coca Cola. While Coca Cola may spend billions on a friendly public face, there actual behavior make it quite clear the Coca Cola cares much more about profit than they do people, the environment, it's workers, or children.

During the meeting there were several moments that when the 30 of us decided to disrupt the proceedings by calling out blatant lies made from Coke's CEO. After feeling like our concerns weren't addressed we all decided to take our questions straight to  Coca Cola's headquarters on North Avenue where we held a picket at the entrance of the building.