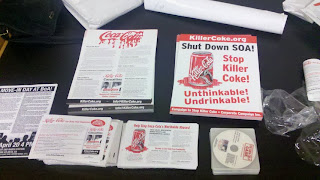 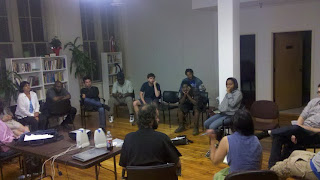 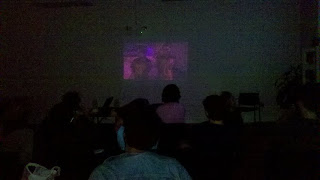 Next week (4/25) at 9:30am, Atlanta's biggest corporation, Coca Cola, is hosting their annual share holders meeting at the Cobb County Galleria.

Though you may not enjoy drinking Coke, Sprite, or Mello Yella, you most likely drink Coke products whether you know it or not, they own more drinks stocked on the shelves then any other corporation. Coke is the Earth's most recognizable brand.

There's a very dark side to the world of coke, one that includes destroying other countries natural resources, and straight up murdering thousands of Latin American union organizers fighting for a living wage.

A few days ago AFSC played host to a film screening of "The Coca Cola Case". The film screening was organized by Occupy Atlanta and was part of their education campaign leading up to Coke's share holder meeting.


Watching the film had a profound effect on everyone who attended. The sentiments in the room drove folks to not only committ to never drinking coke products again, but to also show the film to their networks, and show up at next weeks share holder meeting.