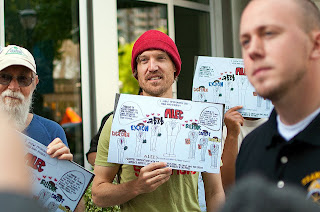 Today a diverse group of Atlantan's representing various communities and organizations gathered outside of the apartment that Senator Don Balfour uses during the legislative session, the same apartment he has come under fire for using tax payers money to rent.

The purpose of gathering was not only to celebrate our collective victory in defeating SB 458 and SB 469, but also to draw the clear connections between corporate money and Georgia law makers. Folks who turned out made it clear that the days the politicians can do the will of the 1% and expect no push back are over.

Senator Balfour was an Obvious target. He's a member of the American Legislative Exchange Counsel(ALEC) which has come under fire, largely due to national occupy movements collective actions, for the first time in 30 years. ALEC model legislation is responsible for anti immigration legislation(like HB87), pro-gun laws(like,"Stand Your Ground" law in Florida), and anti free speech laws(like SB 469).

At ALEC conferences the model legislation is created, then it's crafted to fit various legislative bodies(state and federal) and it's usually sponsored by lawmakers that are members of ALEC, like Don Balfour.

ALEC has surely reshaped our political landscape over the last 30 years, and it's exciting that people form different communities are connecting the dots and unifying to defeat ALEC bills and educate the public about has this shady crew rolls.

On a side note, Coca Cola dropped out of ALEC today as a result of political pressure. Coca Cola was one of 28 ALEC board member corporations.