We Will Not Be Moved!! 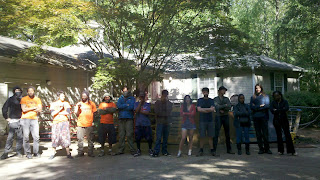 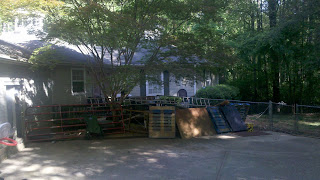 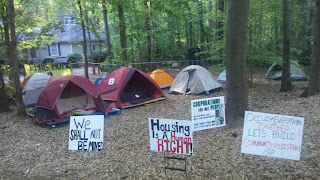 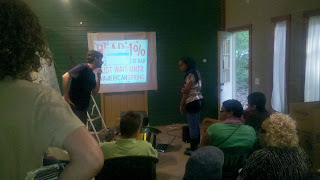 The last 24 hours at Occupy Atlanta’s South Dekalb home Occupation (Chris Frazer’s home) have been prolific. Yesterday at 6pm Chris Frazer’s home played host to launch of the 99% Spring Offensive trainings in the Atlanta area. Union members, Church Members, folks from local grassroots organizations, and occupiers came together to talk about the economic crisis, tell their stories, engage in direct action training, and make plans for a Spring offensive that targets the institutions of the richest 1% who have been disrespecting our human rights for decades.
There are around ten of these trainings scheduled in the Atlanta area, at churches, union halls, community centers, and homes across the metro area.
Today that direct action training came in handy. Occupiers, who have been camping in the yard of Chris Frazer, where awoken at 8am this morning by the sound of two Dekalb County Marshall's who drove their patrol cars onto the property and requested to meet with the owner of the home. The Marshall's decided to back off, possibly due to the fact that a small tent city has amassed on the Frazer’s home in an effort to resist another eviction in the down trotted community.
Twenty minutes later eight patrol cars showed up, claiming to be on a routine patrol on the usually quite street. One of the occupiers decided to block the road at the entrance to 3662 Wellhaun drive, police then arrested him. Other occupiers focused their energy on mobilizing the community and other Occupy Atlanta folks. Within an hour there were around 20 folks in the yard, and a barricade had been built around the entrance of the Frazer home.
The message today was load and clear, no more foreclosures, no more evictions, we are not leaving, no one may take this home from the Frazers. Over and over again we have heard from community members all over the city that neighborhoods need people, not more empty homes, and not more boards on windows. It’s time we stand up to the institutions that caused the crisis. If they attempt to shut down hard working, everyday people, then perhaps it’s time we shut them down.