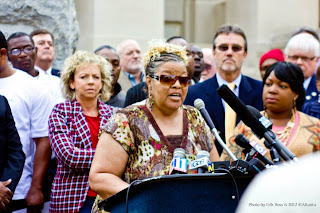 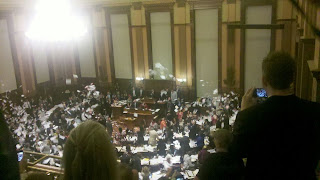 Just over a month ago, we caught wind of anti-free speech and anti-worker Senate Bill 469. This terrible bill was introduced at the hands of some of Georgia’s most powerful corporate and political figures: State Reps Don Balfour, Vice President of Waffle House, Bill Hamrick , Bill Cowsert, and Ross Tolleson, all of who are members of American Legislative Exchange Council(ALEC). We knew that SB 469 was the product of not only ALEC, but the Georgia Chamber of Commerce.

As the bill progressed through the legislature, a diverse coalition—organized labor, Occupy Atlanta, faith-based communities, social justice organizations, and Georgia’s immigrant community—grew from dozens to hundreds to thousands, hitting the streets with one clear message: “Kill this bill!”

As part of our outreach and overall strategy, we reached out to folks on MARTA and at Waffle Houses in Balfour’s district. Our strategy also included lobbying our legislators and training and recruiting for mass civil disobedience.

Today we had people from all walks of life and political persuasions at the capitol from 9:00 am till midnight, dozens of whom were prepared to commit non-violent civil disobedience if the bill passed. This deep commitment from a broad coalition stopped the bill from ever making it to the house floor.

While harmful bills impacting our allies were passed today, the defeat of SB469 sustains free speech for Georgians and empowers us to overcome future legislative attacks. The very human right to publically call out injustice in our communities was renewed and reinforced today.

Like a modern day David and Goliath the resources of the 1% were not enough to beat the resourcefulness of the 99%.