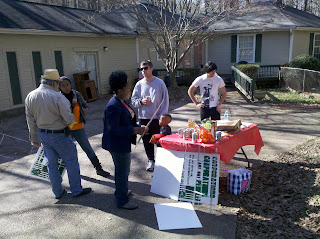 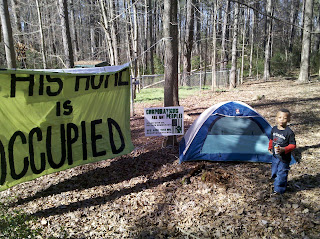 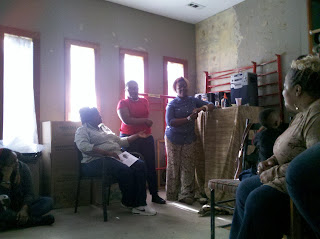 About a dozen folks showed up to the first community meeting held at Occupy Atlanta's newest home occupation in South Dekalb yesterday.

The community meetings have become a staple for home occupations, bringing folks from the neighborhood together to get to know each other, discuss the things they would like to see change in the community, and make a plan to work on it.

Several big ideas were discussed, including problems with the k-12 school system, and the juvenile justice system. At the end of our first meeting we decided to start small by addressing the issue of apathy and trash. The concern was brought up that many in the community had simply checked out. Houses have been abanded for years on Wellhaun road, and trash pills up. So next Saturday at 8am we want the community to see us doing what hasn't been do in a while, cleaning stuff up!

We also decided to host a speak out against foreclosures this Thursday at 11am at The Frazer house(3662 Wellhaun Rd, Decatur) we will have several video cameras to record the stories of folks facing foreclosure/eviction and the people fighting side by side with them.

AFSC was able to pitch in and support this new occupation with some resources but they need more. Here's a short list created by folks occupying the home, will you pitch in?