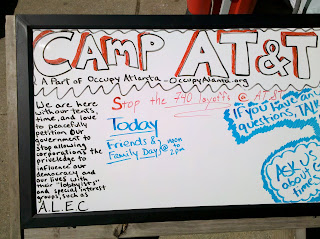 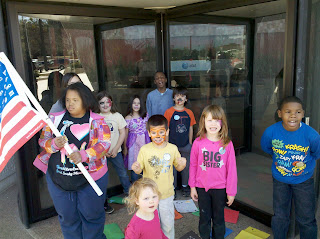 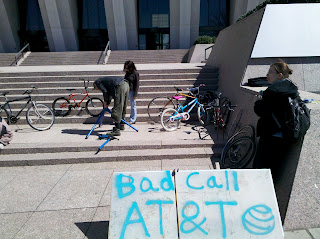 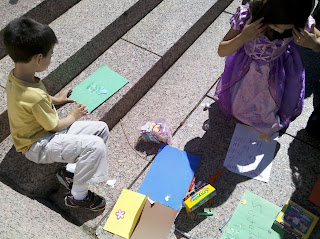 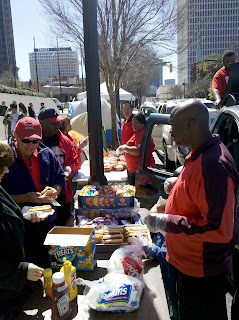 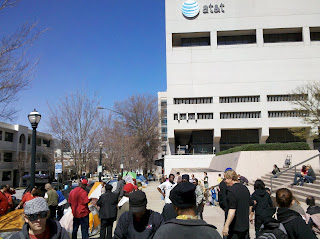 Yesterday, at Camp AT&T, we had our first family and friends day and it was a huge success. It was a beautiful site to see workers and their families breaking bread and building community with folks from Occupy Atlanta.

Communications Workers of America brought a massive grill and made sure there was tons of food for not only those who showed up, but those who were simply passing through. Occupy Atlanta brought through its excellent mobile bike shop, which was enjoyed by both kids and adults. We had lots of fun stuff for all the kids to plug into.

One way that kids plugged into the campaign to stop the AT&T layoffs was to use their creative minds to make letters out of construction paper, glitter, crayons, and stickers addressed to AT&T. The letters all had slightly different messages but they all basically asked AT&T to stop the layoffs. One young lady event threatened to put AT&T on timeout if they didn’t stop the layoffs.

After writting the letters, the kids delivered them right to AT&T's front door and chanted, "AT&T, quit taking jobs!"


Saturday’s family fun day was a great example of how the face of resistance isn’t always what we imagine; it’s not always holding a sign in the street, or going to jail to challenge injustice. Sometimes resistance laughing, breaking bread, and building community; sometimes it’s holding a spiritual service on forbidden private property, sometimes it’s occupying an uncomfortable space for weeks to visibly demonstrate commitment to justice in your community. Saturday resistance was filled with children playing, folks laughing, sharing meals, and talking about the Atlanta we want to live in.


American Friends Service Committee provided printing and facilitated the arts and crafts projects for kids. AFSC is committed supporting the ongoing struggle against layoffs at AT&T and the rest of the city.

This is an important week for the AT&T struggle. Not only are we facing terrible legislation which appears to have sections specifically targeted at our actions at AT&T, but March 15th could be the day that more layoffs will be announced. So we have a numbers of actions big and small that we would like to ask you to participate in.
Monday 1pm, Media Workshop; how to tell your story.

Wednesday, We need to get as many new campers out as possibly! Our goal is to surround the block! AT&T want more layoffs, we need to make them think twice! The workers have committed to help us grow the camp Wednesday night, can you join?

Thursday 8-9am, Rush hour rally! Thousands of folks will drive by Camp AT&T during that hour, there’s also a ton of foot traffic. If you can’t sleep over, maybe you can come join us in the morning.

Thursday 9am, Breakfast on the steps of AT&T. Come join us for breakfast ya’ll! Maybe even bring something to share!

Thursday 1pm- Starving the hungry ghost meditation on the steps of AT&T. These meditations have been really powerful and totally non-religious. I must say that they also strike a pretty powerful image for those passing by.