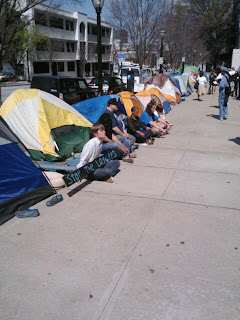 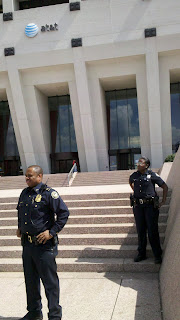 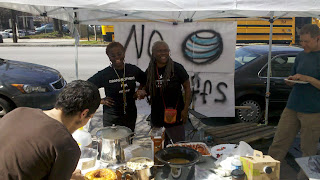 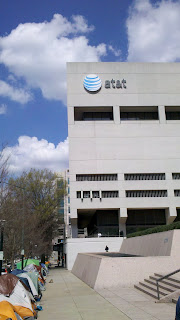 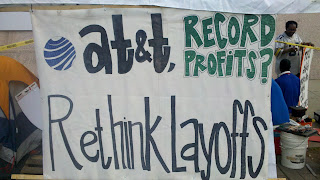 Today was a big day in the struggle to resist AT&T layoffs. For the last three years AT&T has announced layoffs every quarter so tensions were high last night. We had seven AT&T workers join us last night, tents and all. While we were erecting their tents AT&T executives came outside and became visibly agitated, claiming the tents presented a fire hazard and calling on police to do something about the situation.

At one point it seemed like police were preparing to move in and evict the camp, but they backed off when Joe Beasley stopped by and confronted police, calling chief Turner and challenging him to follow the letter of the law. Since then the police presence has greatly increased. Police have threatened to arrest anyone who leans against the wall the interfaces the public sidewalk and AT&T's property.

In the morning AT&T occupiers held up banners and passed out leaflets to folks headed to work. There were prayer services and Buddhist meditation sessions held on the steps of AT&T throughout the day, and Grandmothers for Peace brought a delicious lunch.

After Lunch AT&T workers made themselves available to the press to make statements regarding AT&T's layoffs. Rather than typing it out I'm going to post a video I shot of workers fielding press questions.