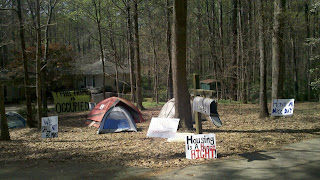 At the home of A 62 year old women threatened with being evicted, Occupiers are fighting to save her home to keep a roof over her family's head.

Today, March 22nd, while working to save this home from illegal eviction everyone was greeted by multiple police cars and helicopters looming over head. Rather than investigating the clearly evident fraud perpetrated Investors One Corporation, the company that's attempting to claim Chris Frazers home, DeKalb police have turned a blind eye on the one's that needed it most.


Shapiro & Swertfeger, the counsel representing Investor One Corporation, have had all of the proper paperwork and knew of the fraud taking place through the chain of title but refuse to expose the injustices. A very predictable move on their part being that lawfirms receive 10% profit from all foreclosures. In addition, the magistrate court judge that handled the dispossessory glossed over the fact that a foreclosure deed wasn't presented at the hearing which is cause for immediate dismissal the paperwork remained unfiled until a week before the appeal was heard.

There is currently a lawsuit being filed against all parties that had a hand in these clandestine business practices. The Dekalb County Sheriff's office still didn't hesitate to send out multiple squad cars to stay stationed outside of the Frazer residence. Despite severe budget cuts the county is facing there were cops told to, "bring a book or a movie" to stay entertained throughout the day there were also about five instances where a helicopter was circling the house, hovering for about 10-15 minutes at a time costing the county thousands of dollars. Tomorrow we are expecting an even more blatant show of force on the side of the Dekalb County Police Department.

One of the officers camped outside Chris Frazer's home claimed that the police force was present to make sure activist campaigning to save the home weren't being violent. Since Occupy Atlanta have been working with the local community we have been nothing but helpful, organizing community meetings where neighbors can share ideas on how to create the change they want to see, facilitating clean up days, and addressing the issue of abandoned homes on Wellhaun road.


American Friends Service Committee is calling on folks to join Chris Frazer and stand against this eviction. We need folks there between 8am and 5pm, which is the time frame that an eviction can occur. Will you join us?