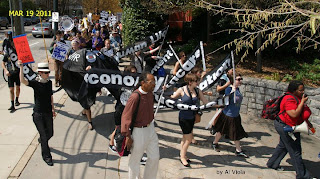 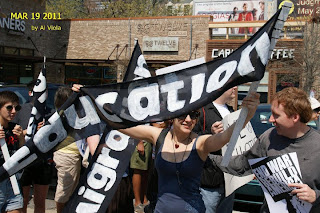 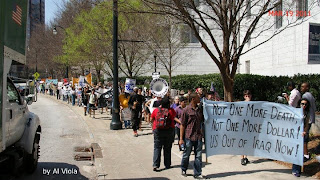 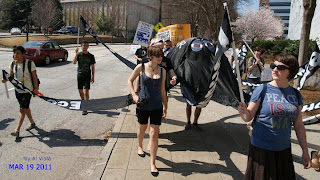 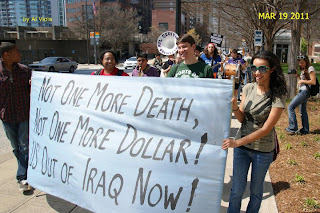 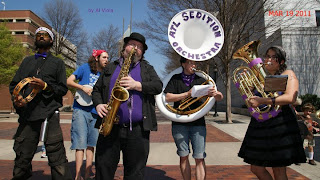 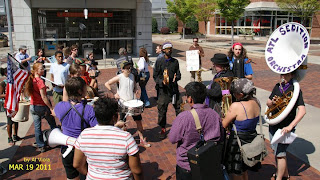 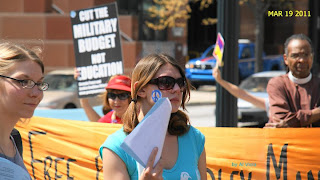 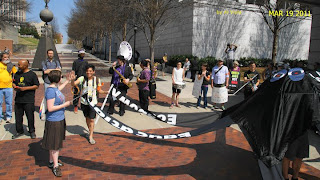 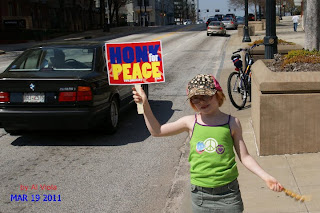 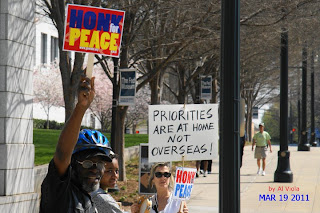 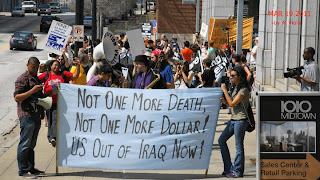 This past Saturday 182(official count) people took to the streets to protest the war in Iraq and the divestment from our communities that has been a direct result of the war on terror.

Eight years ago, before the bombs dropped in Iraq, the global anti-war movement declared that there were no weapons of mass destruction, that Iraq posed no threat, that there was zero connection between 9/11 and Iraq, that if invaded Iraq would be an expensive bloody quagmire, that the war could be endless and unwinnable, and that of course the wars motives were profit driven.

I take no pleasure in pointing out that we were right on every point. The talking points of the anti-war movement have almost always been confirmed fact in hindsight. Today we know that the overwhelming percentage of Americans think we should have been out of Iraq years ago, and many hold similar opinions in regards to Afghanistan. Yet our government continues to find excuses to stay. How is this possible?

Saturday's march was about highlighting the obvious links between a bloated military budget(60% of the purposed 2012 federal discretionary budget goes to the military) and our economic crisis. Locally schools are being radically defunded, public transit is being gutted, programs of social uplift are being cut, and houses foreclosed. Saturday was also about getting more Atlanta folks involved.

As dire as the situation is I was happy to see folks come out to mark the anniversary of the invasion of Iraq. Last year there just didn't seem to be the political will to organize a street action so we ended up doing banner drops and a small rally.

The march felt alive. The Atlanta Sedition Orchestra played during the march and there was a GIANT octopus puppet! The head represented war with each of the eight tentacles representing one of the many costs the war has on our communities.

Saturday I saw folks from all walks of life, young, old, black, white, latino, asian, ladies, fellas, and everyone between come out and participate. I was especially impressed with everyone's willingness to pass out leaflets and start conversations with the general public. We gave out thousands of AFSC's new one minute for peace hands outs that highlight the federal budget and 600 flyers designed to plug folks into issues that their passionate about where passed out as well.

I'm excited to see folks making the connections between military spending and community divestment. Every missile dropped is not only a robbery of human life in the community it's dropped in, it's a robbery of the community that's forced against their will to pay for it.

Thanks to Al Viola for all the great pics! I'll be posting more pics of the march in the next 24 hours!