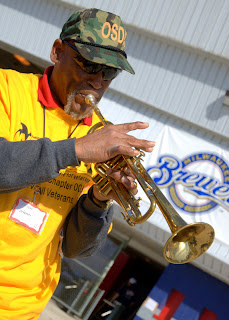 While on his second enlistment Mitchell became very depressed at the news that his wife was leaving him. After requesting to discharge Mitchell was put on various medications and thus began his trips in and out of military hospitals. Mitchell was processed out of the Army in ’79 on chapter 13(separation for unsatisfactory performance).
Since being discharged Mitchell has complained of experiencing symptoms of PTSD but claims the VA needs more evidence before they will treat him.
Mitchell was very excited about participating in the Huntsville stand down. Mitchell enjoyed socializing with other veterans and volunteers and playing his trumpet for everyone. Mitchell was proud to play the star spangled banner for everyone during the opening ceremony for the stand down, he got an enthusiastic round of applause!
For those of you that live in Atlanta you can see Mitchell playing outside of MJQ and the local, and sometimes the Fox Theater for tips. Mitchell's passion for performing is so strong that he couldn’t help himself from busting out his trumpet during our interview and playing a few tunes.

Footage of Mitchell performing outside of MJQ on Ponce De Leon Avenue Wednesday 4-6-11: