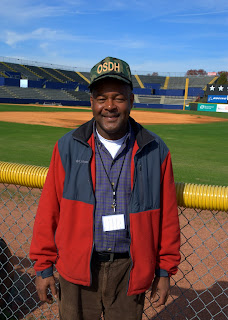 Darrell served in the Army from 1979-1981. He enlisted because he got his girlfriend pregnant and felt that the army would provide him with the job skills training he would need in order to support a family.
In 1980 Darrell volunteered to participate in an experiment involving a black pill that was designed to counter act the effects of chemical warfare. Darrell claimed that he and others became very ill and that most of the guys that went through the experiment with him with him were given a dishonorable discharge. Darrell says his nerves have been messed up every since and that he still has nose bleeds to this day.
Darrell used the weekend to relax, enjoy fresh air, and file social security papers.
Posted by Atlanta Economic Justice Program/AFSC at 7:34 PM