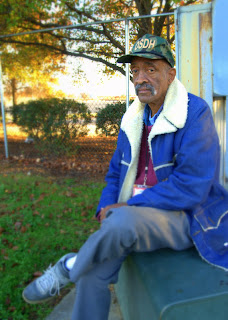 James served in the Army from 1968 to 1971. He joined because he wanted to find adventure and see the world. After experiencing racism in the Army first hand James went AWOL and was eventually given a undesirable discharge. When asked if he thought that joining the Army had been helpful to him he stated, “If I could do it again I wouldn’t go.”
James has been homeless for over a decade and hopes to use the stand down to get legal advice, research employment opportunities, and relax in a safe environment where he’s treated like a human being.
Posted by Atlanta Economic Justice Program/AFSC at 7:22 PM