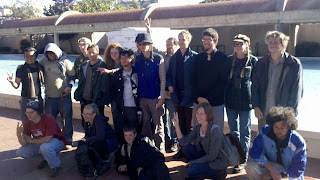 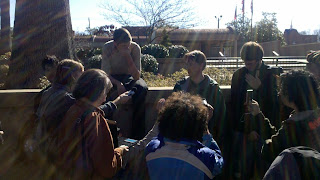 Walkupy, a mobile occupation, reached it's final destination this past Sunday on their 750 mile journey from Washington DC to the King Memorial site in Atlanta. At the King historic site Walkupiers took turns telling stories from the road, and why they were inspired to make Dr King's tomb their final destination.

"This Mobile Occupation aims to unite everyone in an effort to envision and create a new kind of society in which the needs of all human beings are put first.
Our next march begins December 1st, at the Martin Luther King Jr. monument in Washington, D.C. We will march approximately 17 miles per day until arriving in Atlanta, Georgia. Our date of arrival is not exact, as daily schedules are always subject to change according to health and safety concerns.

Along our route, we will visit other Occupations and public spaces such as universities. Our facilitation team will hold Instructional General Assemblies in order to introduce and spread the concept of horizontal leadership, and we will discuss the history and significance of marching and non-violent civil disobedience as forms of protest.