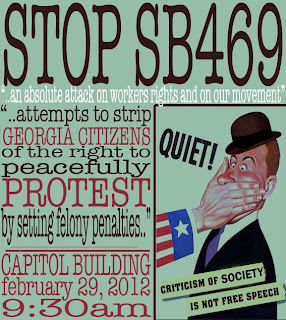 In the AFSC tradition we regard no person as our enemy. While we often oppose specific actions and abuses of power, we seek to address the goodness and truth in each individual.

We are called to confront, nonviolently, powerful institutions of violence, oppression, and injustice. Such actions may engage us in creative tumult and tension in the process of basic change. We seek opportunities to help reconcile enemies and to facilitate a peaceful and just resolution of conflict.

Last week in Georgia, Senate Bill 469 was introduced, and it has captured the attention of the nation. If it passes, it’s likely to open the door for similar legislation. Why is the AFSC community moved to express deep concern with this bill?
We live in a time of unprecedented wealth disparity. All over the country, unemployment, foreclosures, homelessness, and a bevy of other social concerns have driven thousands into political engagement. What we are seeing is a totally new section of our population rising up against injustice in their communities, and in many cases reclaiming power. Senate Bill 469 seeks to dismantle not just people power, but constitutional rights, and human rights as well.

The Bill would make it illegal to picket or protest outside of any non-governmental building. Those that choose to participate in a nonviolent picket could be fined $1,000 per day, and organizations, like AFSC, that supported such actions could be fined $10,000 per day. To make matters worse anyone who is involved with planning civil disobedience actions that result in a criminal trespass charge (this is usually what the charge is for nonviolent sit-ins) would be charged with felony Conspiracy. Under the law AFSC staff, volunteers, and interns who facilitate nonviolence training for groups in the Civil Disobedience(CD) planning process could be charged with felonies whether they participated in the CD action or not.

More troubling is the origins of the Bill. The Bill was introduced by four Georgia Senators, all of whom are members of an organization call the American Legislative Exchange Council(ALEC).To be a member of ALEC lawmakers pay $50 every two years; corporations pay $50,000 per year, and they pay thousands more for every task force they want to be on(there’s nine different task forces).

ALEC holds three big conferences a year and dozens of smaller regional/statewide meetings. The conferences and meetings are always super exclusive and law makers are usually given scholarships along with their families.

One of the things that happens at these conferences is that law makers and corporations draft model legislation, corporations then pick their favorite drafts and lawmakers go home and introduce the corporate approved legislation. One in five pieces of ALEC drafted legislation gets passed.

Senate Bill 469 is the worst kind of ALEC legislation, and a sad example of Georgia lawmakers putting the needs of corporations above the needs of the people.
It’s widely known that AT&T is one of the heavy hitters on the board of ALEC. SB 469 appears to be a direct response to coordinated actions by Occupy Atlanta, Atlanta Jobs With Justice, and Communication Workers of America to stop AT&T from layoff 740 southeastern employees.

AFSC Atlanta challenges members of the Georgia Senate to ensure SB 469 does not pass. We regard no person as our enemy. While we often oppose specific actions and abuses of power, we seek to address the goodness and truth in each individual. Many who live in the Atlanta area plan to converge on the Georgia Capitol at 9:30am sharp and then again at 12pm in front of AT&T at 675 West Peachtree street.You can also call the sponsors of the bill and ask them to reconsider their support for a bill that would have made a felon out of Martin Luther King Jr.