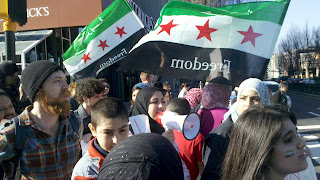 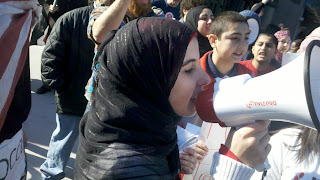 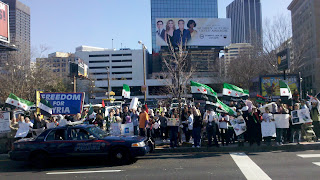 On January 28, 2011, one year ago, Egyptian demonstrators asked for their basic human rights. They bravely faced forces of oppression with their bare hands. Hundreds were killed and thousands injured for life. Today, one year later, these forces are still killing and imprisoning thousands of courageous men and women, not only in Egypt, but across the globe. The fight that started on that day inspired millions from Damascus to Oakland and from Cairo to Atlanta. Today we join forces in support of all the people fighting for a better life. Today we stand up together for a free Egypt, a democratic Syria, and fair America. Come join the Egyptian, the Syrian, and the Occupy Atlanta communities in a rally for a better tomorrow.

“After thirty years of human right violations and corruption, Mubarak was removed from office by a popular uprising. Mubarak’s handpicked Supreme Council of the Armed Forces (SCAF) stepped-in to continue and even escalate the regime crimes. We all witnessed on TV screens the use of live ammunition against unarmed civilians, and the unprecedented violence against women. The American government aid of $1.3 billion to SCAF is unacceptable support to undemocratic criminal body. As American taxpayers and as humans we consider this aid a crime by association. We demand a complete and immediate stop of the American military aid to SCAF, and unequivocal condemnation of their actions.” Said Sameh Abdelaziz , with the Atlanta Arab American.

Since March 2011, human rights advocates estimate that more than 7,000 Syrian civilians have been killed, over 100,000 imprisoned, and many more missing. The cruelty of the regime is on display every day. The Syrian American Council (SAC) echoes the demands of the Syrian people, who are calling for the end of the regime and for Assad to step down. SAC also calls upon President Obama administration to:

- Issue a strong condemnation of the ongoing massacres in Syria, specially the escalation in the city of Homs.
- Pressure the UN Security Council to adopt the Arab League plan, send international observers to the besieged cities in Syria, and to refer Assad and others who are complicit in his crimes to the International Criminal Court (ICC) to be tried for crimes against humanity. Said Yasmine Jandali, , SAC-GA director

It was a beautiful sight to see so many people from different backgrounds, different nationalities come together with a call for a global revolution of values, calling for a world where everyone's voice is elevated to the same level, a world in which we all have enough resources to thrive.