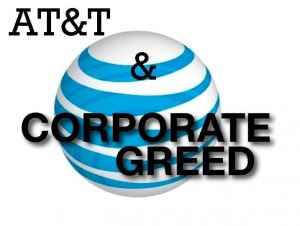 Occupy Atlanta, Atlanta Jobs with Justice, Communication Workers of America, and AFSC have just entered the AT&T Atlanta headquarters and are refusing to leave until every single job cut is rescinded. Simultaneously, an occupation with tents is being set up outside of the building.

Watch the Occupation of AT&T Now

Multinational Corporations like AT&T have been undermining workers standards of living for decades. If we stand up for union jobs with AT&T we can stand up for a future where there's enough for everyone; a future that creates space for all of us to thrive. Lift up the South, lift up this nation.

Let's not get it twisted, there's enough resources to go around. The crisis isn't about resources, it's about economic priority. It's time that the 99% stand up to the unprecedented wealth consolidation that has been robbing our communities. Together we can take these 740 jobs off the chopping block. Let this action be the beginning of a movement to put human need above corporate greed in a very real tangible way.

It’s time to bring the energy from Wisconsin into the South and it’s time to unite the Occupy movement with concrete worker struggles across the country.

Contribute to the Occupy Atlanta Legal fund to support actions like this: