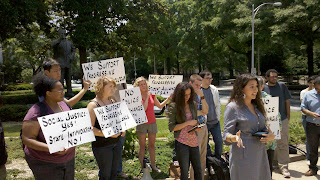 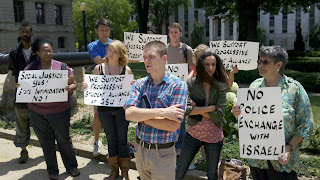 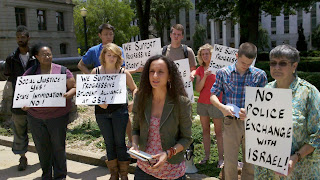 Today Georgia State University students and community supporters gathered at the capitol to respond to WSBTV's recent story which implied that members of the student group, GSU Progressive Student Alliance(PSA), were somehow being used by a shady terrorist supporting group
to obtain highly sensitive government secrets.

The press conference articulated the ridiculousness of these accusations. The reality is that PSA has been working, very publicly, with the Movement to End Israeli Apartheid Georgia(MEIAG) on a campaign to end the Georgia International Law Enforcement Exchange. The exchange basically brings Israeli police to Atlanta to learn drug enforcement tactics while Georgia law enforcement official go to Israel to learn counter insurgency methods, often times in occupied Palestine. PSA had simply filed an open records request in an effort to find out more about the program, which is housed on the GSU campus, and it's impact on the community.

The press conference was held outside of Attorney General Sam Olens office, as he was featured in the story and tossed out some of the more bizarre accusations like claiming PSA’s actions were motivated by the influence of an external organization that may seek a “terrorist attack on local law enforcement.”Or insinuated that GSU students were incapable of developing their own political analysis.

PSA and their community partners have been running a very public campaign, and this is extremely knowable information. All channel 2 or Attorney General Olens would need to do to learn all there is about the campaign to end the GILEE program is do a google search. So either they didn't take the time to do a simply google search, or they left out knowable information in favor of running a story with sensational sinister implications.

It should be noted that Cox Entertainment owns Channel 2, and they're a major contributor to the GILEE program.

One great paradox is that the actual shady organization here isn't PSA or MEIAG, it's GILEE and GILEE's connection to Cox Entertainment and the Attorney General. Let us not forget who these folks are supposed to be serving. Students have the right to ask questions about a program that connects their campus to an apartheid state, to file open records requests, and to do so without being called puppets or terrorists.