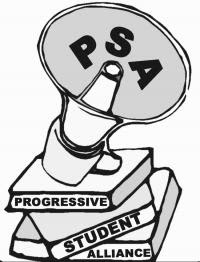 American Friends Service Committee has been an allie of the Progressive Student Alliance at Georgia State University since the group was started, in fact PSA's first few meetings were in our old location off Piedmont road. The student group has come under a bizarre attack by WSBTV, Georgia's Attorney General, and other. We urge you to take the time to call Attorney General Sam Olens and express your concern. Read PSA's statement below:

The Progressive Student Alliance (PSA) of Georgia State University is deeply troubled by the allegations made on WSBTV on May 24, 2011 regarding a open records request made by the PSA. The request concerns GILEE, the Georgia International Law Enforcement Exchange program, housed at Georgia State University, which is a police exchange program between Georgia police officers and the Israeli police.

In WSBTV’s coverage of the request, Attorney General Sam Olens stated that the PSA’s actions were motivated by the influence of an external organization that may seek a “terrorist attack on local law enforcement.” Not only are these comments completely false, misleading, and malicious, but Olens goes on to patronize students, insisting that “students don't wake up one morning and say I wonder where the Dunwoody police officers are receiving training in Israel on terrorism.” Olens argues that students would never have an interest in complex political and social issues and that “somebody bigger” is behind asking for a Freedom of Information Act request. Olens' disbelief in a student organization researching and combating questionable ties between Georgia State University and a country with numerous human rights violations shows a complete disregard for the importance of intellectual inquiry, debate, and social justice.

Due to the ongoing illegal occupation of Palestine and the apartheid system built and maintained by the Israeli state, the PSA has endorsed the international call for the boycott, divestment and sanctions of Israel in conjunction with the Movement to End Israeli Apartheid – Georgia (MEIA-G). The PSA seeks to prevent the very techniques used in upholding this apartheid state overseas from being brought into our own communities here in Georgia through the GILEE program. In a state where working class communities and people of color are already victims of police violence and racial profiling, the PSA is alarmed about the relationship between Georgia police and Israeli police.

The Progressive Student Alliance is deeply concerned about the allegations made by WSBTV. We question where they obtained the information about our Freedom of Information Act request, which is not only legally protected but essential in a democratic society. In the face of such a blatant attack on the right of political expression by GSU students, we hope to hear directly from our school’s administration. Attorney General Olens completely undermines our understanding of history, politics, oppression, change, and the necessity of participatory politics by his false and harmful comments. As university students engaged in the study of global politics and the struggles for social justice throughout the world, it should not only be expected that we act upon the knowledge that we acquire, it ought to be encouraged.

There will also be a press conference tomorrow(5/27) 1:30pm in front of attorny General Olens office.

Posted by Atlanta Economic Justice Program/AFSC at 1:39 AM