Atlanta Rallies For the Arts! 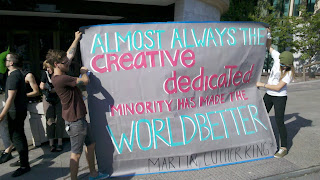 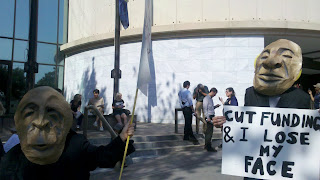 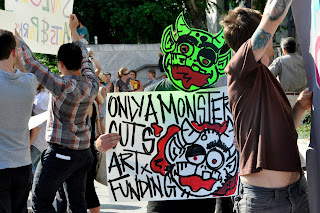 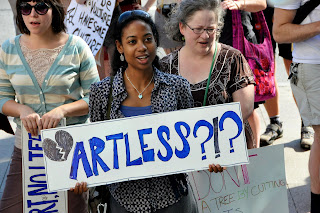 The reason for the gathering? Mayor Kasim Reed has purposed that the council approval a 2012 budget that would reduce its funding for arts based grants to$250,000. To put those digits into perspective Nashville granted $1.8 million directly to arts and culture organizations. The City of Charlotte granted more than $3 million. Both cities are of course smaller than Atlanta.

It’s an established fact that every dollar investing into the arts in Atlanta produces jobs and profit hand over fist. It’s a curious move for Mayor Reed considering the lip service he’s given to the arts in the past.

“Atlanta, if it is to become the world-class city we all hope it will be, must invest more heavily in arts and cultural attractions. Arts and culture are more than just recreational activities. Studies have shown a direct correlation between arts funding and increased tourist and convention revenue, attraction of a more talented work force, and increased SAT scores for public high school students. We need to increase our capital contributions as well as the annual support we offer for operations and grant making. A robust public art program is a vital portion of public support for the arts & cultural community, but we must also build the necessary infrastructure, including affordable live/work space for young artists. I believe that $10 million is the minimum annual commitment we should be making, and I would absolutely support it.”

Today over a hundred people came out of the woodwork to demand that city council reject Mayor Reed budget slashing proposal. It never ceases to trouble me that our Government has no problem finding an abundance of capitol when it comes time to building a new jail or prison to house non-violent drug offenders. It just seems to endlessly rain billions of dollars when Wall Street needs a handout, and the cash flows event harder for seemingly endless war in the Middle East.

What’s the price of recklessly holding up death, oppression, and people who are already rife with overabundance?

It forces our budgets to de-prioritize human need, programs of real social uplift. We are living in our countries’ greatest crisis of economic priority in my lifetime. Never has the public sector been forced to endure the dramatic budget cuts it now faces on every front, and it seems funding for the arts in Atlanta is no exception. I can’t think of a more crucial time for folks to have their political awakening and hit the streets, pick up the phone, and make some noise. We are clearly far beyond the point at which we can expect elected officials to do the right thing and lead us to the world we want to live in. It seems that we must provide that leadership, and they’ll have no choice but to follow.

Call/ Email City Council and demand they support funding for the arts, not cuts!