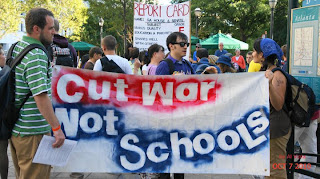 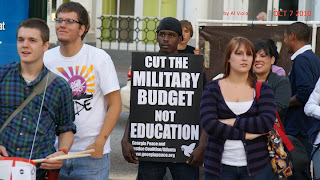 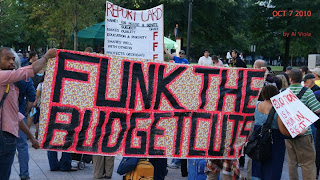 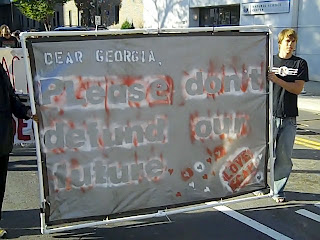 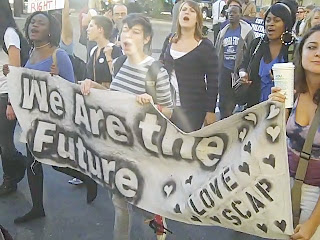 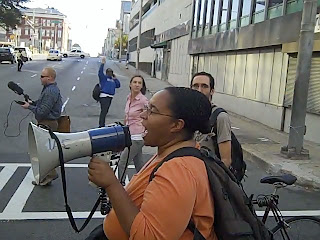 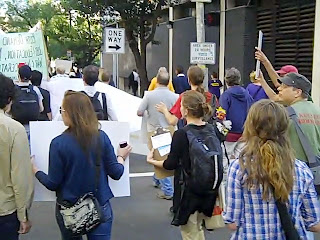 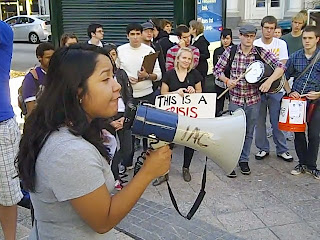 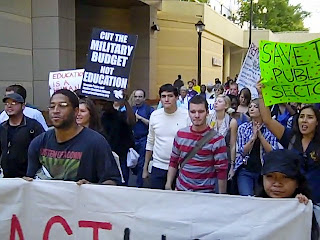 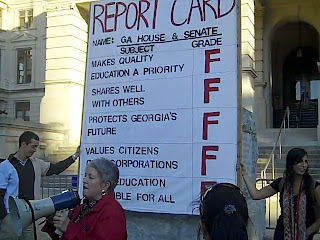 Months ago a national call went out to mobilize in every city across the Country in defense of public education. The Georgia Students for Public Higher Education(http://gsphe.tk/ ) answered the call and began organizing actions around the state. Around the same time the AFSC and Georgia Peace and Justice Coalition sponsored, "Be The Change" youth convergence participants chose to mobilize around education as well.

With 4 billion rerouted from k-12 schools, and dramatic increases in fees and tuition for public university students, youth are literally fighting for their future, a future that if unchecked will see public education become unaffordable, even non-existent.

Students from Athens, Atlanta, Augusta, Kennesaw, and Milledgeville have all been organizing actions in defense of public education.
In Atlanta students worked hard to create a report card to present to the Georgia House and Senate. Sadly the students were forced to give the state failing grades in all subjects. But not all hope is lost for Georgia! The state has been given a grace period to bring their grades up to passing during the next legislative session and we're all hoping that they're up for the challenge.

Students made it clear that this is a fight that has just begun. We are sure to face more budget cuts and bad legislation if we don't turn up the volume. It has been said that we are facing a crisis of resources but many see through that claim. The invisible hand of the market did not magically make all those resources disappear. It's a time to start asking questions. When the government asks for money to build new weapons, fight new wars, or erect new prisons it always rains cash as if there was an endless supply, yet when hard times hit education is the first thing to take a cut. The economic cost of war in truly coming home to roost in a way that everyday people are feeling. We are not in a crisis of resources, it's a crisis of priorities, and only a real re-prioritizing of our national budget is going to save our future. Like it or not, another world is happening, and we must work together to ensure that it's a shared vision that places priority on the things that matter most to everyday people.

Organizations that helped mobilize folks for the Atlanta demonstration:


Other Media Stories on the action:
http://www.myfoxatlanta.com/dpp/news/higher-education-rally-held-in-atlanta-100710