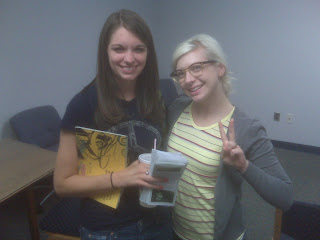 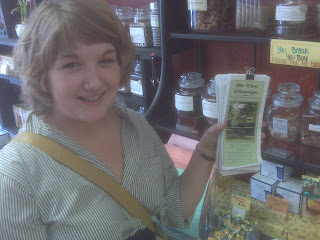 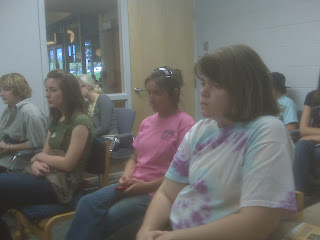 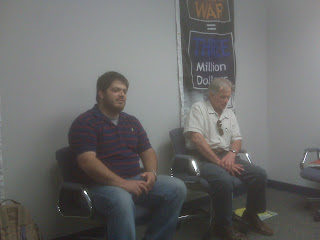 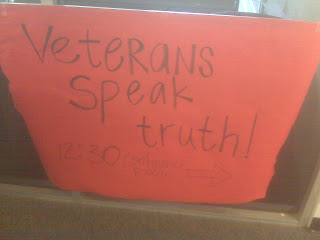 Members of the Dalton State University Peace and Justice group asked American Friends Service Committee to put together an event that would educate students and faculty about the realities of military service and the recruitment process. For those that don’t know DSU is not only a major target for military recruiters, the school has many Iraq/Afghanistan veterans enrolled in classes.

So we organized an event entitled, “Veterans Speak Truth”. We were honored to be able to have Iraq War veteran and form Marine Corps recruiter Chris Raissi and combat medic John Zientowski come speak at the event. Chris and John both shared their experience in the service and expressed feeling like they had joined the military to protect their country and ended up feeling betrayed by the military industrial complex. John stated, “we were sent over there() to kill working people with families just like us”. Chris stated, “I joined after 9-11, I was gung-ho. It didn’t take long for me to realize that this war() had nothing to do with freedom or 9-11. I felt totally used”.

During the question and answer session a rather large young man in the back raised his hand and identified himself as an combat veteran. He proceeded to thank us for coming out and shared his feelings of frustration with our Government and the and war. He brought this writer to tears as he spoke of others he was close with who were killed on the battle field in . He stated, “The military exploited my patriotic sentiment, they used me, they used us and it’s a shame.”

After we left the college we took the opportunity to flyer downtown Dalton with, "Be the Change" Youth Convergence brochures.