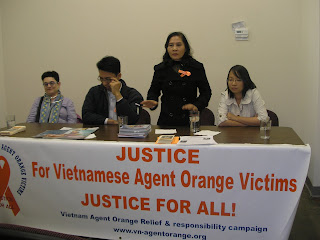 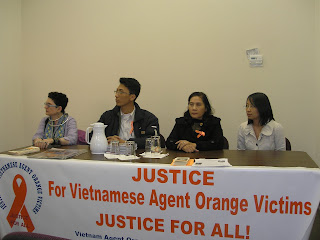 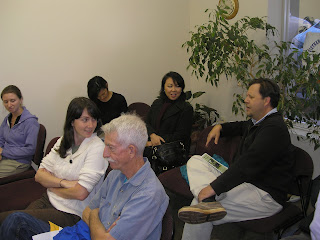 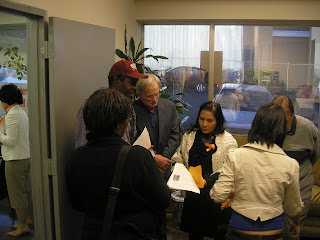 On April 27th, AFSC hosted a delegation touring the US for the 5th Agent Orange Justice Tour. The event was sponsored by the National Lawyers Guild International Committee, National Lawyers Guild-Georgia Chapter, GPJC, International Action Center, AFSC, and Georgia Veterans for Peace. About 15 people were in attendance, including representatives of the various sponsor groups and concerned community members.

Merle Ratner began by outlining some of the work of the Vietnam Agent Orange Relief and Responsibility Campaign. She shared the basics of Agent Orange, a chemical used as a defoliant in Vietnam to clear the land of hiding places and food. Because the chemical was made quickly and in mass quantities, companies carelessly allowed the levels of dioxin to reach catastrophic levels, wreaking havoc on both the Vietnamese people and American soldiers.

Ms. Ratner then introduced the delegation, Pham The Minh and Nguyen Thi Hien. Mr. Minh spoke first and moved the audience with his personal story of being affected by Agent Orange. As the son of Agent Orange victims, he and all of his family members have suffered physical illness and injury due to the poison. However, he is overcoming these difficulties by moving forward and working as an advocate for victims internationally.

Next, Ms. Hien spoke through a translator about her experience with Agent Orange and her work with the Vietnam Association for Victims of Agent Orange (VAVA) helping victims of the war. Ms. Hien emphasized the fact that justice needs to be found for ALL victims of the war and highlighted the three groups the campaign is aiming to help: victims and their descendants in Vietnam, international veterans and their descendants, and the Vietnamese-American community. Ms. Hien's work with VAVA has helped establish innovative rehabilitational programs for victims, and she hopes to extend that work and continue to fight for justice for those affected by Agent Orange around the world.

Finally, John Zientowski with Veterans for Peace spoke briefly about the effect of Agent Orange on veterans and their families. He agreed with the delegation that both the government and the chemical companies should be held responsible and made to compensate victims. The chemical companies were aware of the effects of the poison on both people and the environment. John emphasized that the story needs to be told again and again until the suffering of victims is alleviated, and the response from the audience once the floor was opened for questions made it clear that everyone planned to help spread the word through Internet posts, raising awareness, and fundraising.

The audience was clearly moved by the testimonies. I was particularly struck by how much racism and classism influenced the war, and how much the use of Agent Orange revealed a complete disconnect from the land. It was telling to hear how reluctant anyone is to deal with or take blame for the aftermath. War is already so costly in so many ways. Imagine how much more costly it would be if warring nations actually kept their promises to deal with the consequences of war. It is this true price the Agent Orange Justice Tour is trying to bring to light, the forgotten victims around the world.

To find out more about either the corporate campaign to get compensation from the chemical companies or the bill soon to be going through Congress, please visit http://vn-agentorange.org/index.html. Special thank you to the delegation who made a lot of sacrifices to be here traveling and to the sponsors who made this event possible. Please spread the word about the Agent Orange Justice Tour to your friends in other host cities!