Schooling the System with Spirit! 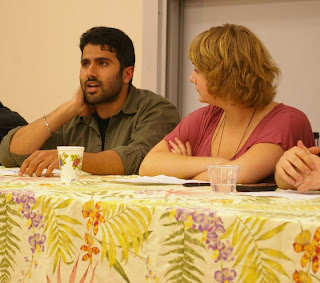 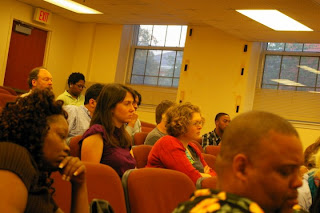 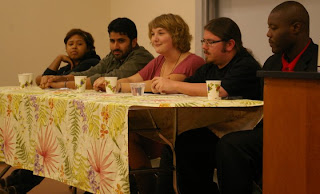 In celebration of the 50th anniversary of the Atlanta Student movement, six amazing students from the Atlanta community came forth and spoke out on what inspires, challenges, and changes they would like to see.

Many people came out to show their support and join in on the discussion of hope for the Atlanta student community.

Our very own Caitlin Barrow spoke about her inspiration through Georgia Peace and Justice Coalition's " Eyes Wide Open" event where they display combat boots in honor of the soldiers fallen in the war overseas. She was so touched by this event she became very involved in her own hometown until she moved to Atlanta. Now that she is in Atlanta,she is a founder and leader in the Georgia Progressive Student Alliance, is very involved with SCAP, and is on staff with the American Friends Service Committee.

Another Student from Agnes Scott really touched me. She identified with what she called a "Queer Blacksican". Her mother being an immigrant from Mexico and her father being a black man. She raises awareness of the link between all different types of oppression and how we shouldn't "compete" on who has it worse, but come together, make our numbers stronger, and fight what oppresses us together. I was really inspired by her words. She really stood for "divided we fall, together we stand" and the saying rings true. She also recognized the importance it is to reach out to the people who do not share the same views with us. Representing your cause in an intelligent patient way can get across much better than defensive banter. And you may be surprised on whos views you may change and knowledge you can spread.

The students brought a fresh new hope that was spread into every person in the room.
And I want to thank each college that was represented : Morehouse College,Georgia State University,Agnes Scott College, Spelman College, Emory University, Georgia Tech.
It was such a delight to hear from these inspiring people and I cannot wait to see their passions and actions lead to change in Atlanta.