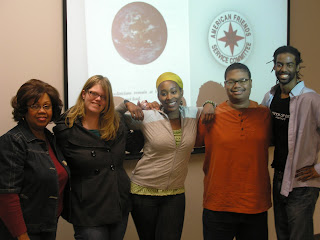 Jeremy Foreman, the coordinator of Hands on Southeast Georgia, recently asked AFSC Atlanta if we were able to come down to Statesboro Georgia and Facilitate our newly developed Movement Building workshop for members of Citizens Climate Lobby(CCL) and we gladly accepted the invitation.
A trip to Statesboro was not only an opportunity to learn more about Citizens Climate Lobby, it was also a chance to outreach for AFSC’s statewide projects including the April 12-16th Martin Luther King Justice Tour and the May 21-23rd, “Be the Change” Youth Convergence.
Once in Statesboro we started the day with a nationwide conference call for the Citizens Climate Lobby. There was over a dozen cities represented on the call and their special guest speaker was Sam Daley-Harris, founder of RESULTS.
The focus of the call seemed to reflect the purpose of CCL which is, “To create the political will for a sustainable climate. To empower individuals to have breakthroughs in exercising their personal and political power.” Each city was asked to commit to making a certain amount of phone call the Congressional representative, set up meetings with politicians, and summit Op Ed pieces to local/national publications. The call was persuasive enough to get me to commit to sending a letter to my congressional Representative (Phil Gingery) in support of CCL’s legislative actions.
After the call I had the pleasure of facilitating AFSC Atlanta’s newly unveiled movement building workshop, which is designed to give participants a basic “how to” session on pushing new ideas to their community, campaign development, building a grassroots organization, and overcoming the personal obstacles that often create barriers to grassroots organizing.
At the end of the day I personally was excited about some of the ideas members of the group had developed to increase the capacity for change in Statesboro. We’re excited, here at AFSC Atlanta, at the prospect of providing the Movement Building workshop to folks around the state in the future!