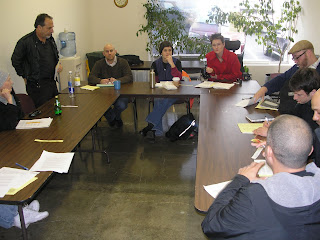 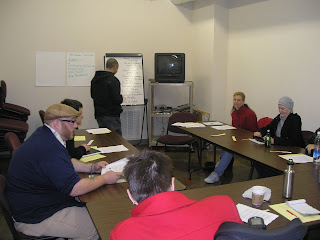 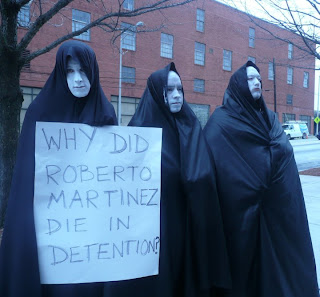 AFSC Atlanta had the honor of being asked by Georgia Detention Watch(GDW) to facilitate a Non-violent direct action training and of course we said yes. Though the work in our Atlanta office has been focused on youth organizing, counter military recruitment campaigns, and general peace building work, we've been keeping a close eye on the important work of GDW.
It was truly inspiring to spend the morning with GDW members that are so committed to a belief that they we willing to go to jail for it-not something I see that often these days. That belief is that no human being is illegal. AFSC shares the belief that immigrants, many of whom fled their home countries due to violence, should not be relegated to prison inmates. Even law enforcement officials admit that the overwhelming majority of those detained, without rights, pose no threat to anyone.
Another troubling aspect of this story is the fact that these Georgia detention centers are for profit corporations. It's no coincidence that folks end up staying there a long time.
After spending several hours discussing non-violent direct action as a strategy/philosophy, exploring actions that folks in the room felt comfortable, and discussion the logistical and legal details of direct action, members of GDW left for lunch and went to prepare for an evening demonstration in front of the ICE building downtown. The demonstration marked the anniversary of the presumed wrongful death of Roberto Martinez Medina, a 39-year-old immigrant held at the Stewart Detention Center, an immigration detention facility operated by the Corrections Corporation of America (CCA).