Non-violence: weapon of the weak, or the strong? 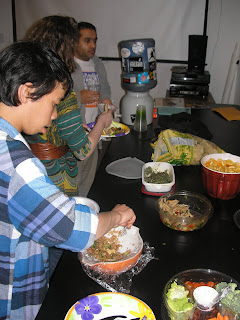 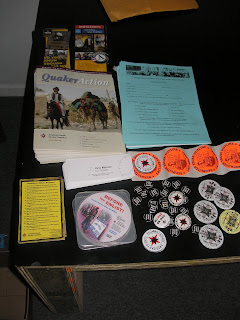 AFSC Atlanta and Wonderroot Community Art Center have partnered on a project called, "Dinner & Discussion" for over a year now. The project basically invites a different Atlanta based non-profit/grassroots organization to facilitate a discussion on a topic of their choice. It's really been a wonderful way to learn about, and network with,all the amazing groups/orgs working for positive social change in Atlanta. In the past organizations like The Sierra Club, Food Not Bombs, The Hunger Coalition, CopWatch, Task Force for the Homeless, The Georgia Veterans Alliance, and Youngblood gallery have facilitated discussion.
Before topics are introduced for discussion everyone is encouraged to break bread together. I'm usually pretty impressed with all the delicious food folks contribute to the potluck style dinners. I think we all agree that these discussions are much more of a pleasure an a full stomach:)

Once a year AFSC actually facilitates the discussion, as we did this past Tuesday. The topic of the night was, "Non-violence: weapon of the weak, or the strong". Participants were each invited to talk about how violence had/has touched/influenced their lives. Each person was given a famous quote from various activists that had used non-violence as a weapon to achieve a political goal.
The discussion lively and ranged from folks sharing their personal obstacles that often stand in the way of becoming more active in social movements, to some in the room questioning how to define violence itself.

Dinner & Discussion takes place every 2nd Tuesday ay Wonderroot Community Art Center. Our next D & D will be April 13th at 7:30pm. Burnaway Magazine will facilitate the discussion on the topic, "How online discussions can lead to action in the community." All are invited!