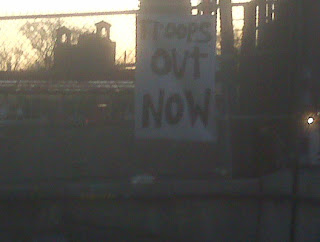 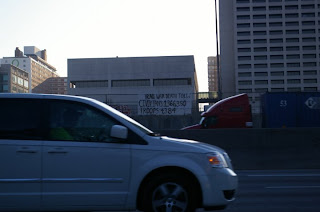 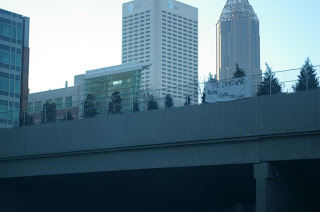 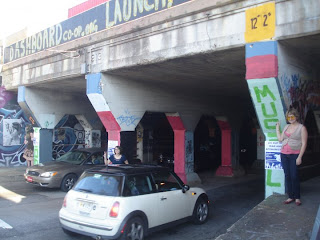 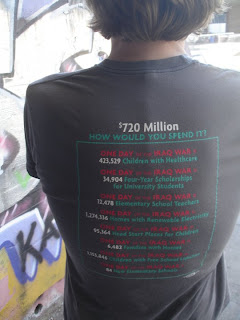 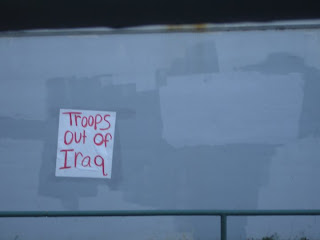 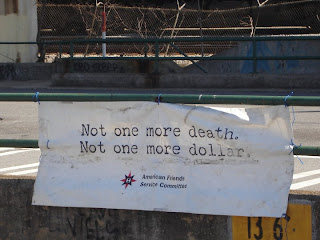 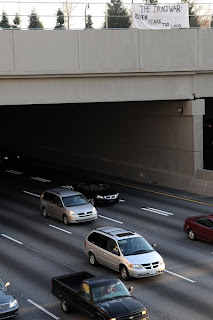 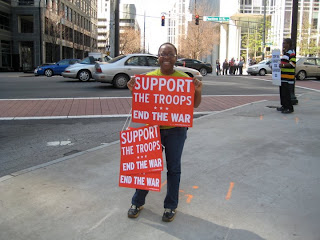 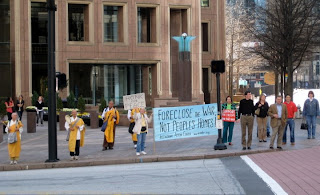 It's hard to believe that we have been living with war in Iraq for seven years now. With the economic crisis and health care reform taking center stage in our national discourse many people have forgotten that the war In Iraq continues. Paradoxically heath care reform would be an easier sell if we weren't spending unthinkable dollars on a war that an overwhelming percentage of American believe is based on lies, and certainly the argument could(and has) been made that our economic crash is a direct result of these multiple wars(Iraq alone cost 720 million a day!!).

It's time we start to see the Iraq war for what it is, a robbery from out communities. Not only has this war robbed us of people who were loved and needed, it has robbed us of much needed resources.

The draining of social safety nets, the pending increase in College tuition's all over the country, and the Military Industrial Complexes 11 billion dollar recruitment budget,has created a poverty draft into the military. Middle and low income youth often reach out to the military, not to serve their country, but to get a job, a steady pay check. So it's not just an overwhelming majority of our budget that goes to plan for and fight wars, it's also our loved ones.

The Georgia Peace and justice Coalition(GPJC) wanted to do something different this year t mark the 7th year anniversary of the Iraq invasion, something that would perhaps shock Atlanta, remind our city that we still live with this war, we still pay for this war, and Iraqis still die in this war. The idea that was given birth in the GPJC meeting went on to be called, "Operation Anti-War Visibility". Groups and individuals were asked to create banners and signs and that reminded folks that we're still in Iraq. Folks were asked to find ways to make sure mass numbers of people in the city saw these banners, even if it meant risking jail.

AFSC Atlanta answered that call. We hosted a banner making party and resembled several streets teams(members of these teams will remain anonymous). Five huuuge banners were created and three smaller ones. There were also stacks of posters that were made available for wheat pasting projects.

On Friday, March 19th, at 7am,we know that four banners dropped of the 75/85 connector. One very large banner that read, "Iraq War: Seven Year Too Long" was seen on the 5th street bridge, visible to morning commuters going southbound. Another huge banner that gave the casualty numbers for Iraqi civilians and US soldiers was seem dropped right next to the Olympic torch neat the North Ave exit on the connector.

During afternoon rush hour we know at least four more banners were dropped. One was 30x15 ft! One was dropped off the Freedom pkwy Bridge and another huge one was daringly dropped of the overpass on International blvd that read, "Troops out of Iraq Now."

There was also a team of folks that wheatpasted anti-war messages around the city, and there were two lunch hour street demonstrations held, on at 14th and peachtree, and the other on the Marietta Square in front of the courthouse.

We at American Friends Service Committee truly hope that this is the last year we mark this sad day. We can only imagine a world where the resources raised in our communities are invested in social uplift instead of annihilation.

I'll end this post with a quote from Martin Luther King's, "Beyond Vietnam" speech, a speech that has shaped my life in many ways.
"A true revolution of values will lay hand on the world order and say of war, "This way of settling differences is not just." This business of burning human beings with napalm, of filling our nation's homes with orphans and widows, of injecting poisonous drugs of hate into the veins of peoples normally humane, of sending men home from dark and bloody battlefields physically handicapped and psychologically deranged, cannot be reconciled with wisdom, justice, and love. A nation that continues year after year to spend more money on military defense than on programs of social uplift is approaching spiritual death."