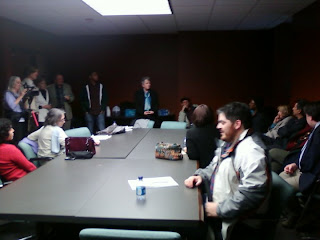 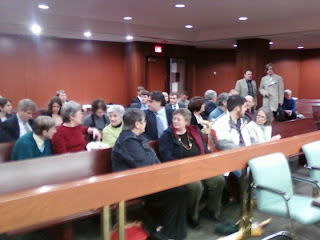 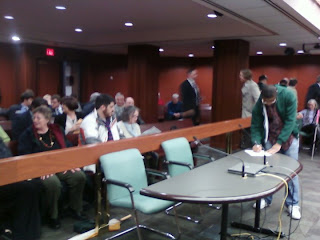 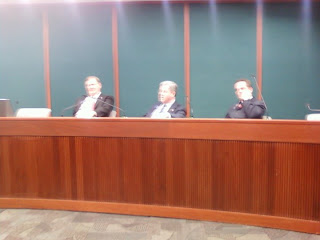 There's been a ton of work that has gone into the effort to introduce SR 955 (http://www.legis.ga.gov/legis/2009_10/fulltext/sr955.htm),educate folks on the realities of military recruitment in Georgia high schools, why it's an important measure, and to develop constituent support in rural Georgia. Right from the get go SR 955 has had the deck staked against it.Those of us that spent time putting the resolution together where rather perplexed that upon it's introduction it was assigned to the more harsh "Veterans, Military, and Homeland Security" Senate committee despite the fact that it clearly belonged in the, "Education and Youth" committee.
Caitlin Barrow spent countless hours calling and emailing folks/organizations around the state and asking them to sign petitions, call their Senators, and come out to the Senate hearing. Here at the AFSC we fielded dozens of media inquiries and took calls from parents,students, clergy, veterans, and educators all over the state that volunteered to come to the Senate hearing and share their stories of inappropriate behavior by military recruiters.
AFSC was very lucky to have the support of Senator Nan Orrock on Representative Stephanie Stuckey Benfield who both sponsored the resolution, along with other Georgia polititians. We also never would have been able to get SR 955 introduced without the hard work of Azedah Shahshahani with the ACLU of Georgia who drafted the original version of the resolution and organized a dozen conference call on the matter.
Despite all the effort that went into preparing, despite that the resolution made sound sense, we all expected the SR 955 to be easily defeated. To everyone's surprise, it did not.
After hearing testimony from John Zientowski(Vietnam combat Veteran), Doug Ament(Iraq war veteran, former UN peace keeper, and global security advisor), Chris Raissi( Iraq war veteran, former Marine Corps recruiter), Susan Keith(Dekalb mother), Andy Fritz( recent high school graduate from Mcdonough), and others the Chairman of the Senate committee said he had heard enough from supporters and wanted to hear from representative from the Georgia National Guard. Two uniformed men proceeded to claim to the Senate committee that they will not even speak to minors about military service with out a signed permission slip from a parent, a claim we know to be false.
After several committee members made comments that came across as demeaning towards constituents that came from all over the state to attend the hearing Senator Jack Murphy made a motion to kill SR 955. When the committee chairperson asked for a second, to our shock, the room got very quiet. Most of the Senators were just stairing at each other. Senator Jim Butterworth, who had shown signs of not supporting the resolution, broke the silence. He said that he believed that there were things about the resolution that he did agree with. Republican Senator Bill Jackson then chimed in stating, "I don't like these wars we're in, I think they're garbage. I can't support this resolution, but I think we have to do something about all these upset parents." There was then a motion to table the resolution and the meeting was adjourned.
After the meeting was over senator Jack Murphy agreed that some sort of standardized Opt Out system would be something he would feel comfortable urging the department of Education to adopt.The standardized Opt Out system that we could life with would be the Opt Out forms being sent to parents at the beginning of the school year behind the emergency contact forms that are mandatory. This would be considered a major victory for young people and parents across the state.
After a debriefing session with Senator Nan Orrock it become clear that we were going to get a standardized Opt out system in Georgia, and that's a pretty good start.
We've come along way, thanks to the effort, support, and donations of so many people, yet we still have a long way to go. Hang in there with us, our future may depend on it!

We hope to soon add video footage of the hearing shot by Artemis productions so check back.