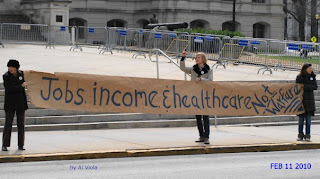 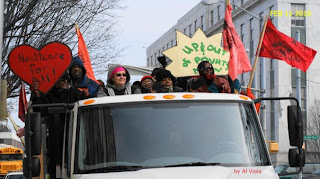 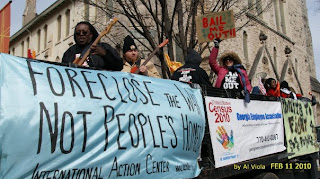 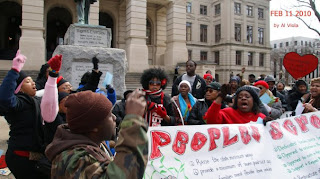 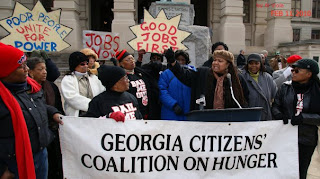 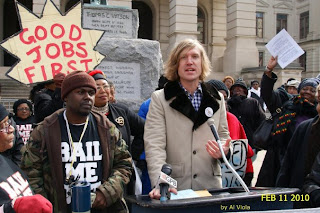 The 30th Anniversary of Poor Peoples Day was successfully celebrated on February 10-11, 2010 in Atlanta GA. The events leading up to this day were put together by the Georgia Citizens' Coalition on Hunger and various local and national grass roots organizations including Project South( http://www.projectsouth.org), Georgia Peace and Justice Coalition(http://georgiapeace.org), Grady Coalition(404.378.5883), International Action Center, and American Friends Service Committee(www.afsc.org). This year's actions have been organized to the backdrop of the most economically devastating year in decades. High unemployment leading to rising rate of foreclosure, debt delinquency, recidivism, increased war spending, loss of health insurance and cuts in public means of transportation just to name a few. With these challenges, organizing this year's anniversary was quite challenging and yet one of the most exciting Poor Peoples Day action in recent years. Months before the Poor Peoples Day, members of the community, together with other local groups had met in a series of meetings to discuss and outline the agenda on which this year's anniversary will seek to adopt and present to the Georgia Assembly.

Key Issues adopted for this year's 30th Anniversary
1. Transportation
2. Housing/Foreclosure/Homelessness
3. Expungement/Re-entry
4. Health Care
5. Minimum Wage/Jobs
These issues were debated in small break out sessions at the day of education with panel guest experts on February 10. After the sessions, each group came out with its resolution which was put together along with other session topics. A final scroll was put together containing the main resolution which was then taken to the State Assembly on February 11. We were giving an opportunity for our key issues listed above to be presented in front of a committee, real life testimonies were also heard from Georgians who have been victimized during these economic downturns. In most cases, the law has been stacked against working people in favor of powerful corporations. We hope these legislators will work with their colleagues in addressing some of laws and policies that often support the growing cancer of poverty in our state.

On February 11, 2010., a caravan carrying hundreds of enthusiastic Georgians from around the state began a Selma-like bus ride to the State Capitol where they were greeted with a larger banner that read, "Jobs, Income, Healthcare, not Warfare", which was painted by AFSC intern Haley Murphy.
During the spirited press conference on the steps of the capitol, AFSC/Atlanta was invited to address the crowd. We used our few minutes on the mic to highlight the connections between racism, poverty, and Militarism. It is our belief that every dollar spent on these wars is a robbery from our community. Each child recruited to fight these wars is a child we need here, in Georgia, to help fight poverty. Never has there been a moment in our lifetime that we needed our your people to serve their country by serving their broken communities...right here! We took a moment to let folks know that there was a resolution( on the floor of the Georgia House(HR1219) and Senate(SR955) that would provide safeguards against the recruitment of children under 17 years old. Folks in the crowd were asked to pick up their phones and call their representatives and encourage them to Support the resolutions.
To find out who represents you in the house and senate got to: http://www.votesmart.org .
For a copy of the resolution visit: http://www.legis.state.ga.us/legis/2009_10/fulltext/hr121
To sign the online petition go to: http://www.thepetitionsite.com/1/GA-Says-No-To-Using-Schools-For-Military-Recruitment-of-Minors

The fight to stop hunger, foreclosure, provide decent wages and health care for all Georgians and working people cannot be seen as a one day event. As much as the this anniversary was successful in carrying the message right up to the State Capitol, the fight must continue in each and every one of us.

All of us at American Friends Service Committee would like to give a special thanks to Dr. Sandra Robertson with the Georgia Citizens' Coalition on Hunger. Dr. Robertson has been a tireless advocate for the poor, working class, and the disadvantaged for decades. She has been the driving force behind not only Poor Peoples day campaigns but the Hunger Coalition. This year's actions not only marked the 30th year anniversary of Poor Peoples Day in Georgia but also marked the last year that Dr. Robertson will be with the Hunger Coalition. Our thoughts, prayers, and gratitude are with her as she makes this transition in her life.