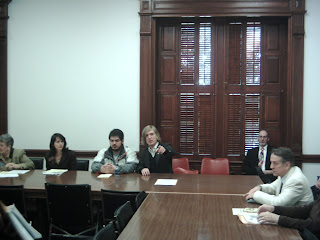 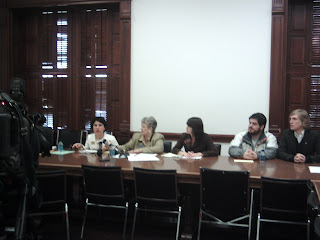 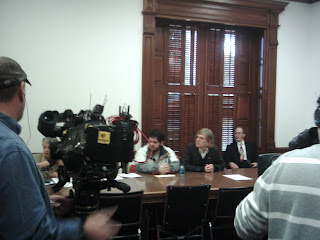 On Thursday January 28th The American Friends Service Committee and The American Civil Liberties Union of Georgia held a joint press conference at the State Capitol to mark the introduction of a resolution that would protect children under 17 from direct contact from military recruiters. The Resolution is the culmination of months of work that began when Azadeh Shahshahani of the ACLU offered to work with AFSC during our campaign to halt the Dekalb Marine Corps Institute project, which would have been a publicly funded Marine Corps themed School run by the Marines and funded by recruitment dollars.
After the successful campaign we began looking at the state of military recruitment in Georgia and came to some troubling conclusions.
Our concerns continue to grow over the racial and economic inequities in military recruitments.Low income recruits continue to fill the majority of boots on the front line, many will also end up filling up homeless shelters as a results of the wounds of war(1/3 of homeless people are veterans).More troubling is the continued reports of deceptive military recruitment practices used on children,often times under 17 years old, in our public school system. Every year the army experience convoys rolls through middle schools all over Georgia, and the rest of the country, to demonstrate how exciting and fun war can be. In their army recruitment pitches combat is relegated to nothing more then a video game.
In our high schools military recruiters enjoy as much access to students as they want, often times parading themselves as career counselors who are only there to help young people with their futures. The recruitment pitch that kids are given often includes promises of college cash, jobs skills training, top notch lifetime benefits, seeing the world, and some kids are even told they will likely not see combat. What young people are getting from military service is usually very different then the picture painted by recruiters. Veterans make 15% less then their non-veteran counter parts, 1/3 of female vets report being sexually assaulted while on duty, only 1/5 of vets every get a four year degree, modern veterans have the highest suicide rate in recorded history, and the enlistment contract binds you but not the military-they can breach the contract as they please.
So this is at the core of our support of the resolution. Children under 17 should have no direct contact with recruiters or military recruitment tools including the Armed Services Vocational Aptitude Battery(ASVAB) and the army experience. Recruiters should not have access to minors, especially without parental consent. Under the "no child left behind" act high schools must release private contact information of all 11th and 12th grade students or face losing their federal funding, this is a pretty scary concept. Often times parents and students are unaware that they have the option to protect their information from falling into the hands of recruiters. This resolution urges school districts to step up their efforts to provide every parent with a form that would enable them to remove their child's info from the hands of military recruiters."
We believe that students, parents, and teachers have the right to have a realistic picture of what military service and military benefits actually looks like before on the front end of the recruitment process.
Chris Raissi, an Iraq war veteran and former Marine Corps recruiter, spoke at the press conference stating, "I think the resolution is very reasonable. Recruiters are trained to work everyone in a high school, from freshmen to seniors. From my experience, the schools don't give any notification to the parents about dissemination of student's personal information to recruiters. If Parents ignore their phone calls, recruiters are trained to track down every kid on the list, either at school or at home."
Azadeh Shahshahani of the ACLU and the sponsors of the resolution in both the Georgia House(Rep. Stephanie Stuckey Benfield) and the Georgia Senate( Senator Nan Orrock) all spoke in support of the resolution at the press conference. The resolution was assigned a number in the Georgia House(HR 1219) and the Georgia Senate (SR 955), and you can expect a lot of organizing around the state on this important resolution.

YOU CAN HELP NOW!