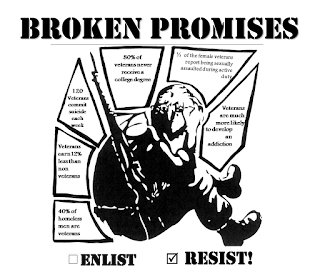 The United States has long participated in programs abroad that prevent the recruitment of child soldiers. The added strain of fulfilling enlistment quotas necessary to carry out sustained U.S. military operations in Iraq and Afghanistan without reinstituting a draft, however, has contributed to a rise in aggressive recruitment tactics and misconduct by recruiters here at home. Such abuse by recruiters, including coercion, deception, and false promises, nullify the voluntariness of youths’ enlistment and are in contravention of the United States international human rights obligations.

The U.S. ratified the Optional Protocol to the Convention on the Rights of the Child on the involvement of children in armed conflict in 2002. The Protocol is therefore binding on the U.S. government and state and local government entities and agents, including Georgia public schools.

Under a binding declaration entered by the U.S. when ratifying the Optional Protocol, 17 is the absolute minimum age for military recruitment - even though the prevailing international standard is to prohibit the voluntary recruitment of children under the age of 18 into the military (in fact, 89 of 128 countries that are parties to the Optional Protocol have a “straight-18” standard that sets 18 as the minimum age for recruitment).

In May 2008, the American Civil Liberties Union submitted a report to the Committee on Rights of the Child (CRC), the United Nations body that monitors compliance with the Optional Protocol, detailing the government’s failure to comply with its obligations under the Optional Protocol. The ACLU found that the U.S. military continues to engage in tactics designed to recruit students under the age of 17, and fails to protect 17-year-old students from aggressive and abusive recruitment. The ACLU also found that U.S. military recruitment tactics disproportionately target low-income youth and students of color.

After examining U.S. recruitment practices last year, the CRC called on the U.S. to end military training in public schools and stop targeting racial minorities and children of low-income families and other vulnerable socio-economic groups for military recruitment, as such activities run counter to the object and purpose of the Optional Protocol.

In Georgia, there are clear indications of violations of the Optional Protocol. According to the No Child Left Behind Act, high schools must disclose student records of juniors and seniors, including students under 17 years of age, to military recruiters or risk losing federal aid unless parents or students sign and submit a form requesting that the data be withheld. Many Georgia schools do not make the exemption forms or information about the exemption forms readily available to high school students and their parents. This is confirmed by Iraq war veteran Christopher Raissi who was working as a Marine recruiter in Macon, Georgia, as recently as 2005. In Raissi’s words: “Recruiters are trained to work everyone in a high school, from freshmen to seniors. From my experience, the schools don’t give any notification to the parents about dissemination of students’ personal information to recruiters. If parents ignore their phone calls, recruiters are trained to track down every kid on the list, either at school or at home.”

Some Georgia high schools also encourage students, including students under 17 years of age, to take the Armed Services Vocational Aptitude Battery, a military placement exam that serves as a military recruiting tool. In fact, students have reported taking the test at 16, because high schools have administered the exam to the entire 11th grade. 16-year-olds who have taken the ASVAB have subsequently been approached by military recruiters at home.

We have also witnessed attempts to open a military school, as recently as this past April. The DeKalb Marine Corp Institute would expose students as young as 14 to military discipline, military culture, and military training. The DMCI would have been funded in part by the Marine Corps out of its recruitment budget and could become a pipeline for targeted minority recruitment into the military.

The school was originally slated to open in August. Due to the strong community mobilization against this proposal, the DeKalb County Board of Education announced in early June that it has postponed the opening date. While celebrating the victory, DeKalb County parents called on the Board of Education not to revive this or similar proposals meant to militarize public school education.

Georgia State Senator Nan Orrock and State Representative Stephanie Stuckey Benfield along with other Georgia lawmakers have introduced a resolution that urges the Georgia Department of Education and Georgia schools to safeguard the rights of children under the age 17 from military recruitment and to implement basic safeguards for recruitment of 17-year-olds .

The resolution encourages Georgia to cease current and future programs and activities designed to recruit children under the age of 17 into the military. The resolution also encourages Georgia to implement basic safeguards for recruitment of 17-year-olds by requiring that military recruitment activities be genuinely voluntary and carried out with the consent of the child’s parents or guardians. To ensure children aren’t recruited without their parents’ consent, the resolution encourages Georgia to actively provide students and parents with exemption (or “opt-out”) forms and information regarding exemption forms that prohibit schools from disclosing students' records to military recruiters as required by the No Child Left Behind Act.

This resolution will be a first step on the path of ensuring that abusive military recruitment practices of the kind we have seen in Georgia will end, and that any recruitment of 17-year-olds is completely voluntary and carried out with the full consent of the child’s parents. America and Georgia must continue to lead by example.