Wells Fargo and US Bank are celebrating Breast Cancer Awareness Month by trying to evict cancer survivors from their homes. 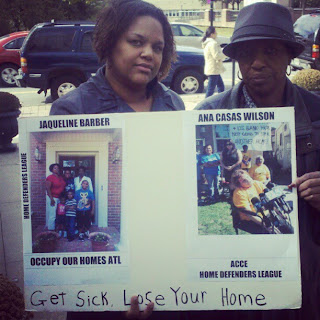 After retried APD detective and Cancer survivor Jacqueline Baber’s story hit the airwaves and newspapers other cancer survivors facing eviction across the country started reaching out to her, and had more than cancer and eviction in common. It seems there’s a trend emerging that links cancer, US Bank, and Wells Fargo.

One of those is Ana Casas Wilson who has lived in the same home near Los Angeles for 40 years. In 2009, she was diagnosed with breast cancer, and her husband had to take some time off to care for her. Their income quickly rebounded, but they missed some mortgage payments. They tried to get back on track and work with the bank on modifications.  Ana was born with cerebral palsy, and has been a passionate and effective advocate for the disabled.

Wells Fargo foreclosed on her anyway, refusing to accept her payments.

Jacqueline Barber spent 20 years on the Atlanta police force, only retiring when injured by a car while on duty. In 2009, the predatory loan on her home caused her payment to go up $1500, and she fought to stay current. Then she was diagnosed with bone marrow cancer and had to undergo aggressive treatment to save her life. She fought back against the disease, and spent months filling out forms and asking for modifications to her mortgage.

A Wells Fargo Executive Vice President assured her they were working on her case. Instead, they sold her loan to US Bank at foreclosure auction, and now she's fighting imminent eviction. The banks are refusing even to sell the home to friends and family who have banded together to help Jacqueline. 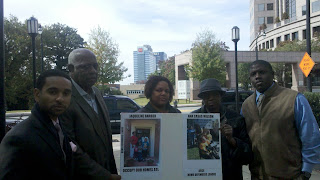 “While the banks do all this cancer awareness lip service with the pink ribbons they’re trying to evict cancer patients like me and Ana”, Said Jacqueline Barber. “In my case, if I had committed the fraud that US Bank did, I’d be in a federal jail. They do whatever they want and get away with it.” Jacqueline is now moving forward with a lawsuit against US Bank for wrongful foreclosure.

“Foreclosure is a cancer of our communities; one way of curing it is to keep people in their homes by working with them through tough times.” Says Jacqueline’s attorney Joshua Davis, who’s filing a lawsuit on Jacqueline’s behalf this week.

“The matter of Wells Fargo and US Bank in Ana and Jacqueline’s case suggests the insensitivity of these banks,” said SE regional Rainbow Push President Joe Beasley. “It’s time for them to do the right thing.”
“I’m surprised the Banks could be so cruel, my mom fought so hard and now this stress has taken her cancer out of remission” said Jacqueline’s daughter Yhonna Flowers

We're in the last week of Breast Cancer awareness month, but it seems like the only awareness Wall Street bankers have is of their foreclosure lists.