Gaza Solidarity in the Streets of ATL 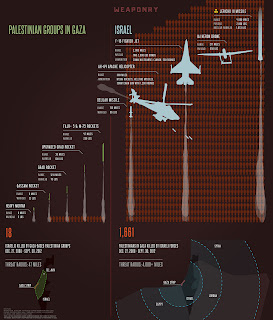 Today about 150 Atlantans crowded outside the Israeli consulate on spring street to call for an end to the assault and ongoing siege on Gaza.

Though an overwhelming amount of media air time has been devoted to the plight of Israeli's living in fear of a Palestinian attack, there are some realities on the ground that are just not being reported in the US mainstream media. 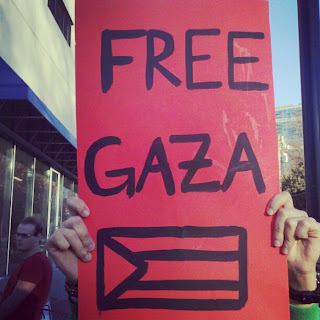 It must first be articulated that Gaza is by far the world largest open air prison. Gaza has been under siege for years, denied most of their basic human needs by a military superpower that has openly restricted food from men, women, and children.

There have been over 130 Gaza fatalities and 5 Israeli deaths. All of these are tragedies  It's also a tragedy that by listening to US mainstream media one would believe that Israeli live are for more important then Palestinians. 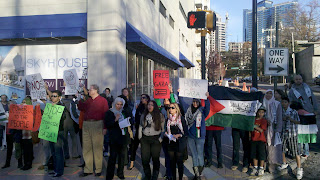 It has been said that there can be no objectivity in the context of clear oppression. It is difficult to take anyone seriously that truly takes in all the facts on the ground in Israel and Palestine and believes the PR coming out of Israel right now, it is a nation that has truly lost credibility. We are grateful to know so many amazing Israeli's here in Atlanta that stand against the actions of Israel, in fact many of those folks joined us in the streets today. 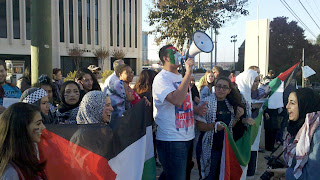 It really must be noted that every bomb being dropped on Gaza is sponsored by the US in more ways then one. The F16's that drop many of those bombs are made in Marietta, and subsidized with US tax dollars. The United States gives about 10 million dollars a day to Israel in military aid. The US also blocks UN resolutions aimed at confronting Israel for what the rest of the world sees as aggressive human rights violations and war crimes towards Palestinians. There was a time in this country when the US government claimed that all native American's were savage sub humans, and they posed a threat to our survival. History of course remembers us as the genocidal savages. 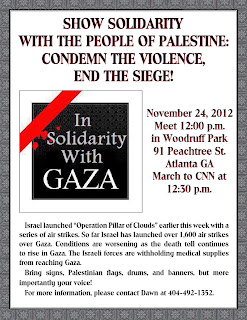 American Friends Service Committee is honored to support the Movement to End Israeli Apartheid action this Saturday. We hope you will join us in building a world that lifts everyone up to the same level, regardless of whether their parents are Israeli or Palestinian
Posted by Atlanta Economic Justice Program/AFSC at 12:43 AM