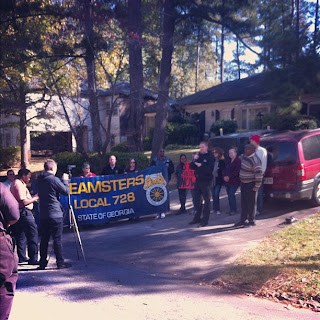 Yesterday Occupy Our Homes Atlanta, Atlanta Jobs with Justice, Teamsters Local 728, AFSC, and other supporters filled Mark Harris yard with a simple message to Fannie Mae, "We are not leaving, make a deal that keeps Mark in this house."

Desert Storm veteran and retired UPS worker Mark Harris purchased his home in 1996 with a VA backed home loan and refinanced it in 2004.

In 2005 he started a trucking business, and then the economy crashed. His illnesses related to his service  in Desert Storm became an issue, and he fell behind on his mortgage.

He’s been trying to catch up ever since; recently he applied for the HomeSafe program here in Georgia. While his application was being processed his VA benefits kicked in, which meant he could afford to make my payments. Greentree(loan servicer) and Fannie Mae(Loan owner) decided to foreclose despite Mark’s willingness and ability to pay.

Occupy Our Homes Atlanta looked over the assignment documents and discovered that some of the country’s most famous robo signers signed the mortgage assignment that was used to foreclose on Mark.

Mark was a proud active member of the Teamsters Local 728 for over 20 years. When Mark fell on hard times he reached out to his union brothers, and they responded.

Both Occupy Our Homes Atlanta and Teamsters Local 728 are members of Atlanta Jobs With Justice, who has agreed to take on Mark's struggle understanding the relationship between housing justice and labor issues, “Unemployment is the number one contributor to foreclosures and evictions in Georgia.  We need solutions that keep people like Mark in their homes, with access to good jobs, instead of putting more folks out of good jobs and their homes.” Said Atlanta JWJ organize Roger Sikes.

Fannie Mae is aggressively moving forward with an eviction, and it could happen as soon as November 15th. Mark Harris states, “As a veteran, I thought the toughest battles were behind me. "I never thought I’d be struggling to keep a roof over my head. I fought for this country, so I know I have a right to fight for my home!”

We urge Fannie Mae to do the right thing and keep Mark in the house, we know his community doesn't ned another empty house, and the streets of Atlanta don't need another homeless veteran. 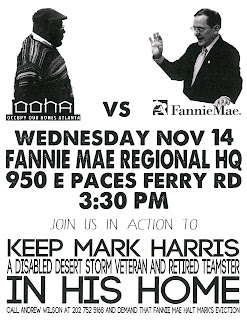 AFSC Plans to join other community members next Wednesday in direct action to support Mark Harris at Fannie Mae's South Eastern headquarters. We encourage folks to join us.