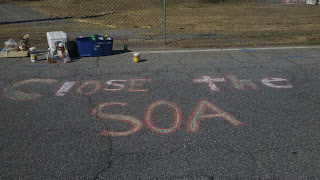 Despite the number of people traveling to Columbus Georgia decreasing each year the SOAW movement has had a number of exciting developments the year.

In September the Nicaraguan government decided to pull out of the school for good after meeting with SOAW organizers. Nicaragua joins Ecuador, Argentina, Uruguay, Venezuela, and Bolivia in it's decision to terminate it's relationship with SOA/WHINSEC. This represents a major victory for the SOAW movement and a payoff for the movements new focus over the past ten years to put more energy into developing relationships with Latin America and less energy into developing the mass mobilization in Columbus Georgia.

SOAW also just had a sit down with the Obama administration. As of now there are 69 members of congress urging Obama to close the school. Here's a link to an excellent report back on that meeting. 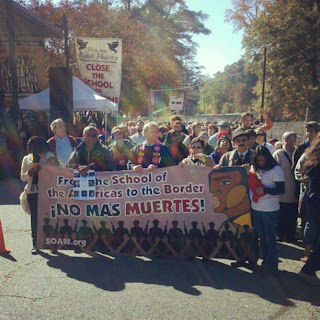 The rally and vigil at the gates was still very powerful this year, with over 2,000 people coming from around the country. This years vigil was a great opportunity to build networks between organizers across a wide variety of issues in person, which is a rare opportunity. The November vigil is maybe the only space I know that brings progressive/ radical people of faith, college organizes, organized labor, pro-immigrant groups, antiwar orgs, anti-racism movements together on this scale. This year brought a new layer of folks organizing around housing as well. 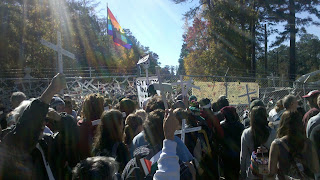 Georgia Peace and Justice Coalition hosted it's annual Georgia Activist meet-up, which brought folks together from Columbus, Augusta, Valdosta, Atlanta, and Marietta. The yearly gathering produced that same kind of cross pollination opportunities that the overall gathering provides on a national level.

This year's rally/vigil also attacked several undercover law enforcement personal, which I've decided to write about in another post.