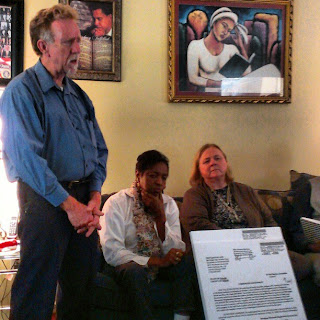 Today Fayette County Woman Jacqueline Barber, who's refused to leave her home despite battling cancer and being under threat of eviction fro US Bank and GMAC, got a visit from someone else who has experience fighting the big banks.

West Palm, FL resident Lynn Szymoniak is the reason "robo signing" is a nasty practice almost everybody has heard of. While Lynn was facing foreclosure she discovered serious problems with the assignments. Documents filled out wrong, missing or terribly incorrect information, and counterfeit signatures, all ways the big banks cut corners so they could foreclose and evict people faster. Lynn to them to task, and won! 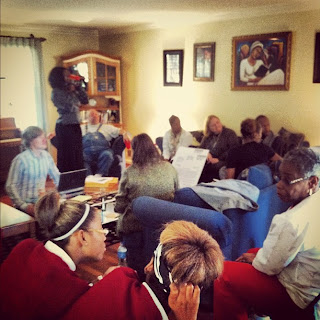 
The settlement she helped the US government win cost the big banks over 25 billion dollars, which she admits should have been closure to two trillion. Lynn volunteered to take a look at Jacqueline's paperwork and guess what she founds, “I look at the assignments and said, ‘Oh no, this isn’t right.' Four different dates the trust acquired Jacqueline’s mortgage in 2007 and 2011. I know this is not correct,” Szymoniak said.
CBS Atlanta 46
Lynn was impressed with our work in Atlanta and stated on numerous occasions that the solutions to the housing crisis do not lie the courtroom, or on the steps of the capitol, in fact in many cases judges and politicians either don't care or are commiserating with the foreclosing entities in one way or another. Our power is in creative, bold direct action. Our power is in the spotlight we force on injustice. Our power is in refusing to play by their rules.

Posted by Atlanta Economic Justice Program/AFSC at 12:52 AM