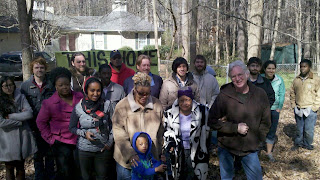 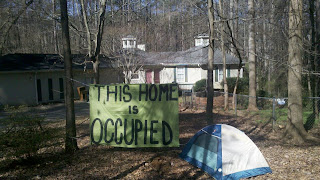 Ms. Christine Frazer, a 62 yr old widow, along with four generations of the Frazer family are being threatened with eviction from the place they have called home since 1994. Mrs. Frazer refinanced her home in 2001; but after losing her husband in 2002, taking in her elderly mother in 2003, losing her job in 2009 due to a “no-fault, one-minute-late tardy policy,” and being denied unemployment after two appeals, she was left with no way to pay her mortgage.

The very same crumbling economy that caused the value of Chris’ home to depreciate left her hopeless in today’s highly competitive job market. Mrs. Frazer’s home was foreclosed on in October of 2011 after faithfully paying her mortgage for over 15 years! Investors One Corporation sent her a statement claiming she had to pay $176,000 on a house that the very same document stated is only worth $40,000.This foreclosure is wrongful and Occupy Atlanta will assist Ms. Frazer in the fight to expose the fraudulent actions that have taken place. Many other families and individuals across America have fallen victim to these unlawful practices and Occupy Atlanta is fighting against such injustices case by case.


Leila Abadir, of the Occupy movement, stated, "
"Occupy Atlanta was introduced with the compelling story of four generations of a family being evicted from their home. We are genuinely touched by all families across the U.S being affected by financial hardships caused by the mortgage bubble, those both burdened with insurmountable debts that will forever loom over their heads and those that were robbed of their homes, but this was a particularly touching story due to its many inconsistencies, inconsistencies that could have easily been uncovered and kept this entire family far from the last steps of eviction. Chris’ story represents the story of so many families across America that are being robbed of their security by big banks and investors that continue to profit off the backs of the working class people. "

AFSC is excited to support this important, historic work as the Atlanta metro area faces hundreds and thousands of foreclosures this calender year.
Posted by Atlanta Economic Justice Program/AFSC at 2:26 PM