Occupy Atlanta Is On The Move 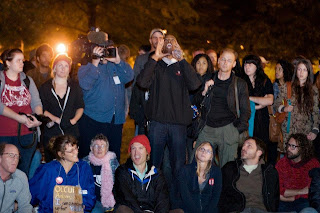 I had originally planned on doing a daily blog post focusing on Occupy Atlanta but I've ended up taking on so many tasks related to the movement that I've had little time to do so. I plan to make time this evening to write out some thoughts and updates, I can say that we live in extraordinary times with unseen possibilities. Below I'm putting out a list of daily activities that I'd encourage folks to come out to between now and Monday, along with a powerful video that was shot yesterday.

· March for Task Force for the Homeless

Hundreds more homeless people are created by foreclosures and joblessness every single month! Even with this, the Atlanta Task Force for the Homeless is being threatened of closure. We Cannot Allow This!!

· “Jobs Not Cuts” March to the Capital Building

Georgia has the 3rd highest Poverty Rate among states and the 4th highest in Foreclosures in the country. WE NEED JOBS NOW!!!

Come and learn skills from others while sharing your knowledge. Let’s Build Together!!!

· Film Screening of The Corporation

“THE CORPORATION explores the nature and spectacular rise of the dominant institution of our time. Part film and part movement, The Corporation is transforming audiences and dazzling critics with its insightful and compelling analysis.” and also includes interviews with 40 corporate insiders and critics.

· Meditation on Peace and Justice

Time/Place: 12pm @ the Auburn side of Troy Davis Park

· Solemn March to the Tomb of Martin Luther King

This Candle Light Vigil will be dedicated to a discussion on the impact of Dr. King’s racial massage. We Must Keep This Discussion Alive!!

Learn the stories of people struggling on one block of Mitchell Street. These are stories of the homeless, jobless and business owners on the verge of losing everything. Hear The Stories of the 99%!

We need critical mass at 11pm, when the park closes. Those who are present will not have to participate in non-violent civil disobedience if they choose not to. We need not only folks who are prepared to put their bodies on the line, we need those that are willing to witness and keep the occupation alive.