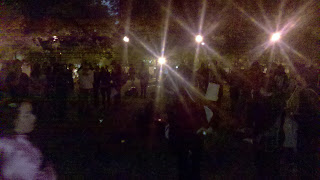 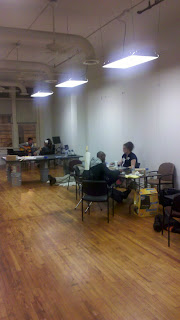 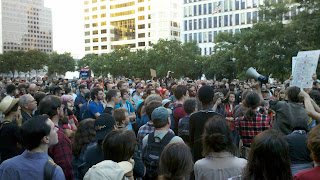 Tonight Occupy Atlanta held it's 5th and by far largest general assembly in Woodruff park. I estimate that around 700 people attended, many attendees had never been to a public demonstration and had no idea what to expect. Many where surprised to find themselves in the middle of the largest planning meeting they had ever been too. Not only was this planning meeting big, so was the meeting process.

The Occupy Wall street movement is, in part, a direct response to the problems that come when an extremely small segment of the population control most of the wealth and, as a result, have a much louder political voice them others. Many occupiers have lost faith in the political system as it stands today.

So it is by no accident that the decision making process the Occupy Atlanta group uses is participatory. Many in tonight's crowd had never seen a consensus model in practice. The process has a tendency to be beautifully inspiring and painfully frustrating at the same time. The process is a struggle. Perhaps real change from the ground up can't come any other way but through real struggle. It's been interesting to see the ways in which people very new to activism respond to this process.

After hours of meeting the decision was made to illegally occupy Woodruff Park. As of now, 1:32am, the police have made no arrests, although there have been several showings of polices force. There are several hundred people camped out in the park, with many others set to join tomorrow. I look forward to publishing the demands of Occupy Atlanta as soon as they are officially accepted, they are beautiful.

The AFSC Atlanta has been happy to open our doors to the Occupy Atlanta group, and they have basically transformed our 2nd floor into their headquarters. It's a safe space where folks can use the restroom, get some food, check in with the media center, and get first aid.