Jobs with Justice hosts "Speak Out for Jobs Now!" 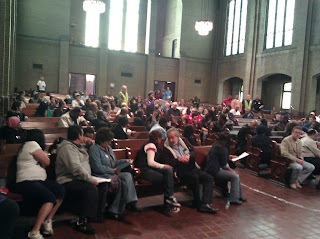 Hundreds of Atlantans gathered for the April 2 Jobs With Justice event that was partially sponsored by the AFSC. Jobs With Justice, a national campaign for workers' rights, held the event at Trinity Church near the capitol. Service organizations and advocacy groups were present to help people with their needs including expungement support, signing up for food stamps, TANF, and medicare. Volunteers from the Atlanta Volunteer Lawyers Foundation were there to make people aware of free legal services for help with legal issues like eviction defense, landlord-tenant disputes, protection from unlawful debt collection, and making employers pay unpaid wages. Attendees could also receive free massages and haircuts. BLOCS, a group that works to eliminate brutality from the Atlanta Police Department was there, as well as Kelli's Childcare Collective, a group that offers free childcare at activist events.

There was also an opportunity for individuals to speak out about their situations. A large number of people testified, many of whom said they felt desperate and at their wits' end. One young woman explained that she has been looking for a job since she was 12 but cannot get one because she is only 17 and has no work experience. One man testified about how hard it is to find a job with a criminal record. Another man said he has skills and work experience, but spoke about the difficulty of finding a job with a homeless shelter as the only address he can put as his on job applications. Another said "I spent time in jail, got out to a halfway house, but I had no work history so I couldn't find a job." Since he was not able to meet the employment requirements for the halfway house, he was sent back to prison. One woman has worked as a home health aide and has her certified nursing assistant certificate, but reports that she still can't find a job despite good work experience, good resume, good references, and the certification. Another woman explained that she had worked in several different fields, including security and law enforcement and does not have trouble getting jobs--but she cannot keep them because of anti labor laws like Right to Work and laws that allow employers to fire employees at will for arbitrary reasons. Still another woman explained that she had had a job but that someone else had been imprisoned with her name, saddling her with a felony record and causing her to lose her job. Now she is entangled in a bureaucratic snare of trying to get her name cleared and her record straight.

Among the speakers was State Senator Nan Orrock. Orrock said "we must...rebuild a movement" of working people to demand fair treatment. She denounced the anti-labor laws of the recent legislative sessions and said public employees "are not harming the economy, they're part of the backbone of the economy." She spoke of the foreclosure crisis and the fraudulent mortgages millions of people were tricked into, and decried the fact that "the person who's losing the home gets the blame, not the people who caused the crisis." She also enjoined the crowd to stand up against the wave of anti-immigrant legislation that has been introduced this session, saying the bills "fuel hatred". She urged the crowd to call their voters' office and the Lieutenant Governor's office and demand that they "kill those anti-immigrant bills".

State Senator Vincent Fort also spoke, saying the anti-immigrant legislation is an attempt "to pit black people against brown people ... trying to turn us against each other because they know if we came together there'd be hell to pay." He also spoke against the recent cuts to education passed by the state legislature, saying that they hurt workers because the HOPE scholarship will no longer pay for technical schools. He also decried the changes to the HOPE scholarship that disproportionately target poor and minority students, who will lose their scholarship money more than wealthy white ones. He called on listeners to boycott the lottery, which has been used to fund the HOPE scholarships: "why should you pay to finance your oppression? ... Why should you pay to send a corporate executive's child to school?" He pointed out that "the lottery money comes from working neighborhoods" and goes "from Bankhead to Buckhead".

Importantly, speakers also lay down concrete next steps for attendees to follow to demand jobs with justice--"not slave jobs, but jobs with a living wage, with benefits, and enough leisure time to spend with our families," said JWJ organizer Tony Romano. Organizers called for a march on April 4, the anniversary of Martin Luther King Jr.'s assassination, to demand respect for workers' rights. King was killed when he was in Memphis supporting striking sanitation workers who were demanding fair treatment. The march is set to start at the King Center on Monday April 4 at 5:30 pm.
Posted by Atlanta Economic Justice Program/AFSC at 5:04 PM