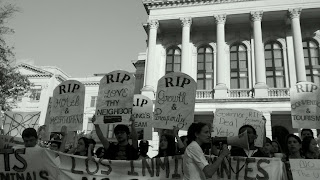 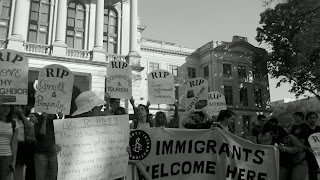 Today is the last day that HB 87 can pass the house and senate and as I type bill is being debated on the floor of the Georgia house of representatives.

Outside the capitol hundreds of human rights activist have been holding a vigil, and holding onto hope that those under the dome will vote to kill HB87.

During a time of economic crisis it's not surprising that some in the Georgia house and senate have attempted to scapegoat our state's money problems on anyone but themselves, and undocumented workers seem to be a pretty easy target being that they have been politically voiceless for decades.

The reality, however, is much different then what HB 87 Architects painted. Georgia's top two industries are agriculture and tourism, both industries are fueled by undocumented workers, both industries have lobbied against HB 87. The similar Arizona bill that passed last year sparked international boycotts of the state which cost the state millions in revenue.

But this is about much more than economics.

Sadly HB 87 passed tonight, effectively rolling out the red carpet for Jim Crow. The fight isn't over, we then turn our eyes, our energy, our voice, and our prayers to Governor Deals office with one singular message: Veto This Bill!