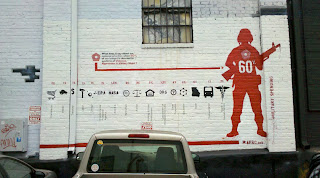 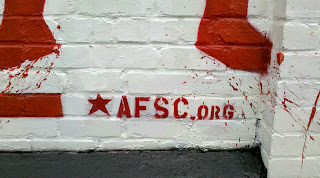 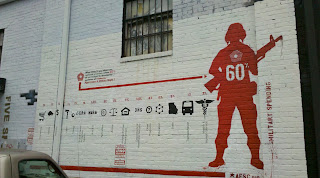 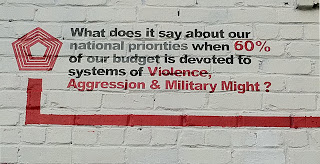 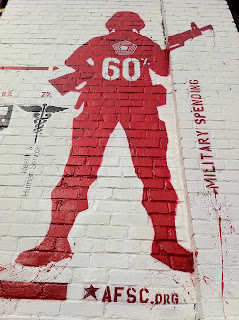 We've been working with Camron Wiltshire, of We Are Change Atlanta, for several months to develop a mural for the 5-Spot wall in little 5-Points. The 5-Spot gave us permission to put the mural up last October after our Love Bombs Over Euclid Event.

Camron purposed a mural inspired by AFSC's "One Minute For Peace" campaign, which basically draws attention to the gross crisis in spending priorities our federal government continues to perpetuate. Everyone was knocked out by Camron's design. Volunteers came out of the woodwork to help put the mural up, it really looks great.

We're really excited to have the mural up in such a prominent spot. Thousands of folks walk by the wall off Euclid over each weekend.

Big thanks to the 5-Spot for the space, Camron Wiltshire for the amazing design and heading up the mural painting, Angie Brooks for scaffolding, SCAP for providing resources, and all the volunteers who helped paint, took pictures and video!!!

There will be a few minor touch ups to the mural this week, including the addition of the One Minute For Peace website and the articulation that the numbers presented are the 2012 recommended discretionary budget.