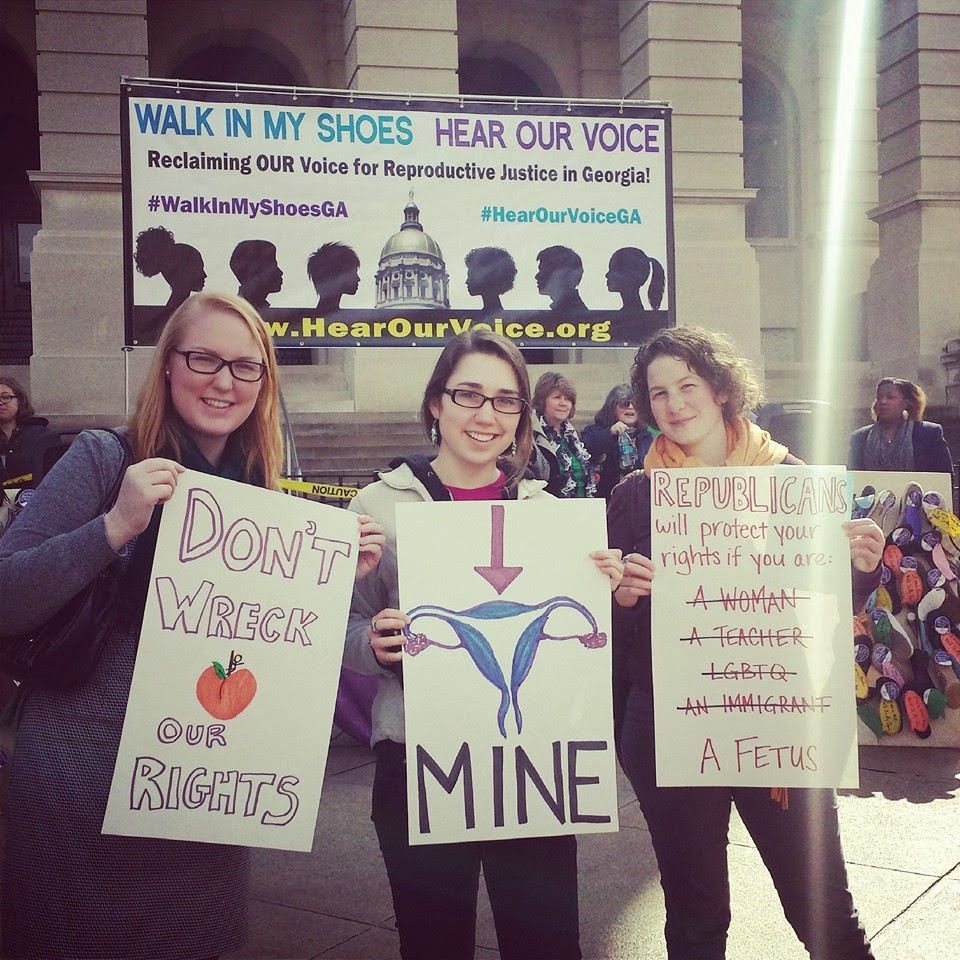 Today American Friends Service Committee joined over 35 organizations and hundreds of Georgians rallied together at the State Capitol. The event, “Walk in My Shoes, Hear Our Voice,” protests proposed bills that are discriminatory, restrictive, and dangerous.

“It’s unconscionable that Georgia lawmakers are focusing on measures that would eliminate health insurance benefits for women instead of focusing on the economy, job creation, and preventive health benefits,” said  Janelle Yamarick, Advocacy Director at the Feminist Women’s Health Center 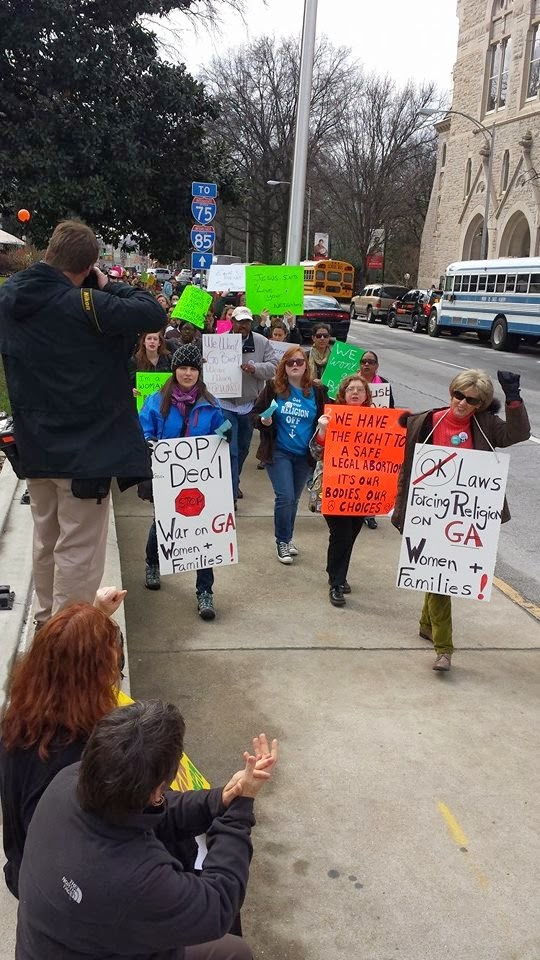 “The extremist attacks on the rights of Georgians must stop.  The string of legislation attempting to control and discriminate under the guise of religious freedom is offensive. We won’t go back to a time of inequality. It is time for Georgia to move forward,” says Jaime Chandra, Marketing & Communications Manager at the Feminist Women’s Health Center.

The Georgia General Assembly has advanced numerous bills that would inevitably reverse essential rights or deny access to vital health care.  The following are examples of such legislation:
SB 377 & HB 1023 as introduced use broad definitions that significantly expand the legal ability to refuse and discriminate based on religious belief systems. These bills define ‘burden’ as any application of law or policy and ‘person’ includes corporations and other entities. The impact of these bills would allow pharmacists to refuse to fill prescriptions and businesses to refuse service based on religious objection. These bills could also limit a person’s ability to acquire prescriptions or referrals from their doctor, or receive emergency reproductive health care. These legislation proposals could even impact employment based on gender, sexual orientation, marital status, marital history, pregnancy status, contraception, or hormone use. See more information from the ACLU about using Religion to discriminate: https://www.aclu.org/using-religion-discriminate

SB 98 would limit coverage Georgians purchase with their own money through the ACA exchange that provides comprehensive reproductive health care benefits, including abortion. State employees would also be denied this coverage in law. This bill changes the insurance coverage that Georgians have right now; most insurance plans cover abortion, but this bill removes those benefits with dangerously narrow medical emergency exceptions.

HB 772 would require applicants to be tested for controlled substance at their own expense, those who fail would be deemed ineligible for food stamps, The language is an exact replica of that for drug testing TANF recipients.  Recently Florida law was struck down by Judge Mary S. Scriven of the US District Court in Orlando on December 31, 2013. (Source: goo.gl/eYizTe) Georgia has not implemented drug testing on TANF recipients because of the Federal Court’s decision that such a procedure would violate illegal search provisions of the US Constitution. Senator Nan Orrock said HB 772, if enacted, would violate the Fourth Amendment prohibitions against warrantless searches. She also said it would cost more money than it would save. (Source: goo.gl/p2gb5a)

SR 1031 would amend the Georgia State Constitution to declare English as the official language.  This resolution would remove multi-lingual driving tests and the ability of elected officials to speak a language other than English while performing official actions of the state.

SB 334 & HB 707, “The Georgia Health Care Freedom and ACA Noncompliance Act,” would do exactly as the title suggests. It aims to prohibit any local or state government entity from engaging in activity that aids in the implementation of or education regarding the Patient Protection and Affordable Care Act. State employees would be prohibited from referring people to the ACA exchange website or phone number, creating barriers to accessing affordable healthcare.

HB 990 would require Legislative approval to expand Medicaid, prohibiting Georgia’s Governor from executive authority. Medicaid has already proven to lower infant mortality, increase access to preventative care, and ensure women preventive healthcare throughout all life stages. Since many pregnant women go into labor with chronic health problems, preventative health care access is crucial to reducing pregnancy-related deaths.  This bill would delay the critical decision Georgia’s Governor is already empowered to make with one stroke of his pen. 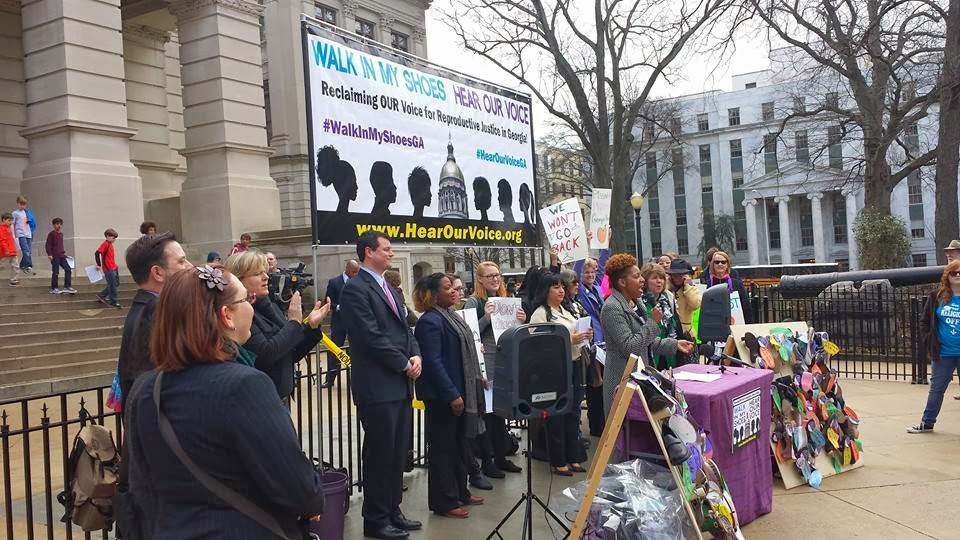 “Walk in My Shoes, Hear Our Voice.” Our organizing principle is as follows:  We are here to reclaim our voice.  We reject bills that do not comply and support bills that do comply with the following principles* for all Georgians: