Thoughts on My Recent Arrests 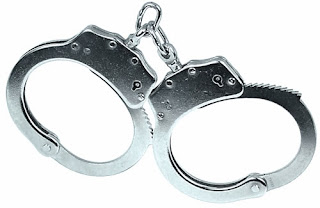 My first Occupy Atlanta(OA)related arrest went down the night OA was evicted from Troy Davis Park. It was an intentional act of civil disobedience I proudly took part in with 51 other Atlanta activists.

It was only a few days before that when a local TV station declared me the leader of Occupy Atlanta, a title I certainly didn't want, nor could our leaderless movement afford. It was an uncomfortable position for me to be in. I understand that there's no way to control what or how media outlets report the news, and I knew the consequences(both internal and external) of being named a leader.

It was right after the first eviction that several young OA participants took me aside and told me that people from the FBI had visited their homes and questioned them about me. They claimed that FBI agents had asked if I would be open to acquiring weapons, if I had a militant side and such. One of the questioned youth actually gave me the FBI agent's business card. I called it the next day and informed the agent that I knew everything there is to know about Tim Franzen, that I was in fact the worlds utmost authority on all things Tim Franzen. When he asked who I was I stated, "Tim Franzen."

I'm not one who's ever felt the need to operate underground, don't mean to dis those that do. I feel proud of the work I do, and there are no actions I participate in that I'm afraid to have associated with my face. I told the FBI agent that he should be ashamed of his actions, that he had no right to run around Atlanta scaring people for no other reason but to crush a movement to address gross economic injustice through nonviolent direct action.

Several weeks later I participated in an action on the Courtland street bridge. We marched through GSU onto Courtland street. The sidewalks were jam-packed with people. Before the police officers warned the crowd to disperse from the street I had already gotten onto the side walk. One of the police Lieutenants yelled to his officers, "Get him" and pointed at me. The police had to worm their way through the crowd in order to grab me and drag me into the street.

When I was dragged into the street, I asked the lieutenant what he was doing and he said, "arresting you."
"For what", I asked.
"For being in the street", he said.
"But I was on the sidewalk", I replied.
"You're not now", he said with a smile.

This is what folks refer to as a targeted arrest. On that day there was at least one other targeted from the sidewalk. Targeted arrests aren't just meant to punish an individual, they're designed to suppress and damage a movement.

Since that day I've often found myself a target by law enforcement. Recently I was asked to be a dignitary on the annual King Day march. I was to march with Brigitte Walker and be one of the many folks who spoke at the rally which concludes the march. It was an honor to ride on the bus with the Orange family, who's legacy goes back decades before I was born. Halfway through the march Mayor Kasim Reed joined the dignitaries and I immediately was tapped on the shoulder. It was one of the mayor's plain clothes officers. He asked my why I was marching with the dignitaries. I told him I was asked to by the organizers of the event. He then laid hands on me, and waved several other officers to assist him in removing me from the crowd. Several dignitaries, including Brigitte Walker and Carmen Pittman began to protest. Finally the Sheriff of Fulton County, who was in plain clothes as a dignitary, ordered the wrongful arrest to stop. I was flustered, but marched on without getting badge numbers or really thinking too hard about filing a complaint. I remember thinking all in all, it's just not a big deal.


Yesterday, after about a hundred OA protesters marched to a Chase Bank branch and demanded the bank work with one of many families that got ripped off by the very predatory loans that help crash our economy, I was arrested along with Shab Bashiri.

At the protest there where several pieces of household furniture placed in front of the bank door. There was other debrie placed there as well. The idea was to create the painfully familiar scene of an eviction right in front of a bank responsible for so many. Much in the way AFSC attempted to bring the Iraq war home with our "Eyes Wide Open" campaign, organizers of the action brought the foreclosure crisis to Chase Bank's doorstep.

After the demonstration was over Shab and I chose to ride with a friend back to our car. We would have walked with the crowd, but it was Shab's birthday, so we had a party to get ready for. As we drove we noticed police following us right away, then we noticed channel 11 was following as well. When the blue lights came on I knew what was about to happen. I started texting folks right away. By the time police asked Shab and I to get out of the car, there was a small crowd of OA folks and channel 11 was filming. The arresting officers let Shab and I know that we were being arrested for littering. To avoid dealing with more OA folks and the media, one of the lieutenants asked that we be driven to the Manuels Tavern parking lot. When asked why the officers followed us from the bank and waited until we were several miles away to pull us over he replied,"I was ordered to."

Once we were brought to Manuel's parking lot, three unmarked cars pulled up, each one belonging to Atlanta's top brass. Chief Turner's #1, and #2 cops circled the car Shab and I were locked inside of along with about a half dozen other police. I couldn't tell what they were talking about, but I know there was some discussion about what our charges would be.

They put the two of us, just two, into our own paddy wagon. The driver proceeded to drive around the city for over an hour while Shab begged to use the restroom. The officer then stopped at Buddy's on Highland to use the restroom himself and get a snack break. Finally he got us to the city jail, where we were told we should be out in an hour or so. This was around 9pm. We didn't get out until almost 4am, largely due to the fact that there was a problem with our charges and APD had to come back and fill something out. I later found out that Joe Beasley called Chief Turner and told him he needed to get me out. I have no doubt that sped up the process.

Today I attended a rally for international dignity with our Middle Eastern brothers and sisters. We marched to the CNN center and it was beautiful. Hundreds of people from different corners of the globe calling for global resistance to oppression through economic injustice. While participating, my arm was grabbed by a police officer who claimed to know me well. He told me I needed to get off the sidewalk immediately. I told him that he needed to remove his hands from my body and took note that he was bothering no one else in the crowd of hundreds. Thankfully a bunch of OA folks surrounded me, letting the officer know mass arrests awaited if they targeted me.

I've decided that this behavior is worth calling out. It is unacceptable to target a few folks in an effort to shut down a movement. A targeted arrest should be seen as an attack on everyone associated with the Occupy movement. To let this slide is a disservice to others and our movement.

There are many lessons to be learned from the last few months as far as targeted arrests go. One is an old rule, march with the crowd. If you decide to seperate from the crowd, beware. There are other lessons, I'm just not ready to articulate them on this blog.

This is perhaps the most personal blog post I've ever written, but I feel it's somewhat overdue. I'm not the first person in the Occupy movement to be the victim of targeted arrest, and I surely will not be the last. In fact, I'm sure I have several trips to jail in store for me in the near future. From now on, I'm not going to write off this police behavior. Im also not going to allow the threat of targeted arrests to change the way I work. I reject the idea that I should not attend actions, or that I should change my wardrobe or cut my hair, and am willing to pay whatever consequence they have coming.

The simple fact is that we are a threat to an economic system that year after year gives more privledge to the weathiest at the expense of everyone else. We live in an important moment, a beginning, an uprising. You may not know that you are a part of it yet, but we all are.