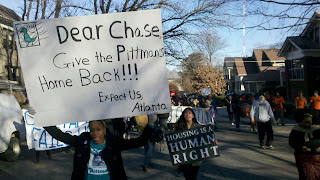 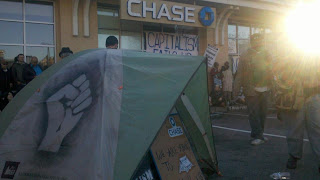 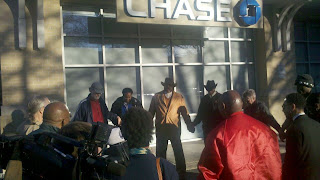 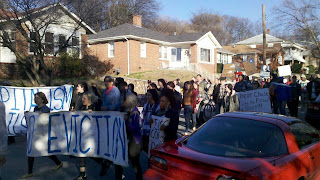 This past Friday, January 28th, Occupy Atlanta Marched with the Pittman family to a Chase Bank branch with one simple demand, give the house back.

For marched was sparked by Chase bank's unwillingness to offer a deal that would keep the Pittman's in the house that's been in the family since 1953.

The march brought together around 100 or so activists. The group was remarkable diverse in most ways measurable. Once at the bank there was a number of actions that went down. First it should be noted that the bank itself was shut down several minutes before we showed up. Apparently they were on high alert, along with several other Chase branches in the area.

Once outside the branch some participants put old furnature outside Chase's door as if to simulate an eviction scene, some broke out into dance, some chanted slogans like, "shut it down", there was even an interfaith prayer service, attended by several Quakers, outside the bank.

The demonstration managed to shut the Chase branch down for the last two hours of the bussiness day as well as make a clear statment to Chase bank that holding the Pittman home is a lose lose scenario for them. It's clear that Occupy Atlanta and other organizations will continue to escalate until Chase agrees to truly work with the family to insure they can stay and own the house they've called home for almost six decades.

There was one targeted arrest, but I'll be writinging about that in a seperate post.